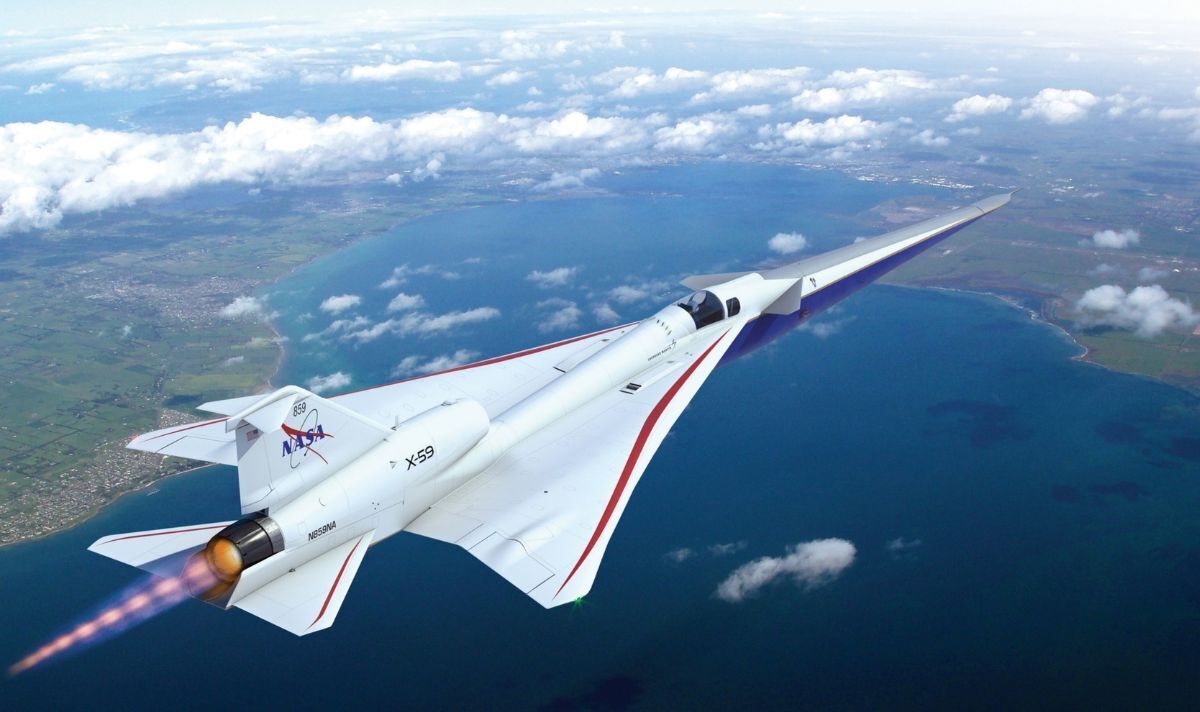 NASA is planning a series of test flights of a new, experimental aircraft which has been shaped to try to achieve faster-than-sound travel without generating a sonic boom. Supersonic flight, which achieves speeds in excess of around 768 miles per hour, generates shock waves in the air that merge into two distinct booms that follow the craft in question. For this reason, supersonic travel over land is usually prohibited because of the unacceptable noise that it produces — even though reaching such speeds have the potential to cut down commercial flight times by around half.

To overcome this limitation, NASA is to explore a new aeroplane configuration — realised in the experimental Lockheed Martin X-59 (“Quiet SuperSonic Technology) QueSST aircraft — that should be able to overfly noiselessly at supersonic speeds.

Mr Shah said: “NASA’s X-59 aircraft is intended to validate and demonstrate the design tools and technologies that make it possible to design an aircraft with a different shape that alters how supersonic shock waves behave.

“Instead of coming together to be heard as a loud boom, the shock waves do not merge. They rapidly weaken, resulting in a sound more like a soft thump.”

To assess whether the design is effective in practice, NASA is planning a series of test flights over various communities in the US. Mr Shah and his team will be both recording the sound of the aircraft as heard on the ground, as well as conducting surveys of members of the public to understand their willingness to accept different sound levels.

According to the space agency, it is hoped that their data will inform regulatory agencies in the prospective development of an overland supersonic sound standard in the US.

In a statement, NASA said: “NASA’s aeronautical innovators are leading a government-industry team to collect data that could make supersonic flight over land possible, dramatically reducing travel time in the United States or anywhere in the world.

“The Quesst mission has two goals: 1) design and build NASA’s X-59 research aircraft with technology that reduces the loudness of a sonic boom to a gentle thump to people on the ground.

“And 2) fly the X-59 over select U.S. communities to gather data on human responses to the sound generated during supersonic flight and deliver that data set to U.S. and international regulators.

“Using this data, new sound-based rules regarding supersonic flight over land can be written and adopted, which would open the doors to new commercial cargo and passenger markets to provide faster-than-sound air travel.

NASA has said that the first test flight of the X-59 will take place next year, with the following 18 months of trials allowing the agency’s engineers to ensure that the aircraft performs as expected and is safe to fly.

Following this, in 2025 and 2026, the craft will begin tests overflying four-to-six communities across the US, data from which it will deliver to regulators in 2027.

Mr Shah delivered a presentation on the Quesst Mission today at the 183rd Meeting of the Acoustical Society, which is being held this week at the Grand Hyatt Nashville Hotel in Tennessee.

While most modern fighter aircraft are capable of supersonic speeds, few commercial aircraft have been designed for operation at speeds beyond Mach 1, the “sound barrier”.

There are two notable exceptions, however — including the Soviet Tupolev Tu-144, which had its maiden flight in December 1968 and last flew in 1999, and the Franco–British Concorde, which operated from March 1969 to November 2003.

The Tupolev Tu-144 was removed from passenger service in 1978 in the wake of two crash-landings. The craft remained in use as a cargo aircraft until 1983, after which it was employed solely for research and training purposes by the Soviet space program and NASA.

Public enthusiasm for the Concorde, meanwhile, waned in the wake of the crash of Air France Flight 4590 — a disaster which killed all 109 passengers and crew, along with four members of staff at the Hôtelissimo Les Relais Bleus Hotel into which the airliner crashed.

The tragedy was caused by the aircraft driving over debris on the runway, which caused a tyre to explode and damage both the extended landing gear and an internal fuel tank, leaving the plane unable to achieve the speed required for a controlled lift-off.

However, the accident highlighted a weakness in Concorde’s design — the design had 70 tyre- or wheel-related incidents in just 27 years in service — and even subsequent improvements to the craft appeared unable to restore public faith in the airliner.

This, and the drop in air travel passenger numbers in the wake of the September 11, 2001, terrorist attacks ultimately led to the craft being dropped from service.