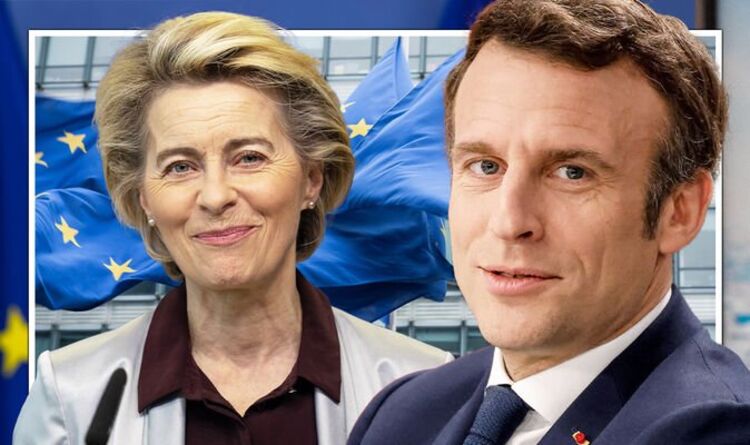 The EU figurehead is facing a titanic fight to cling onto his presidency, with the latest polls suggesting right-wing rival Marine Le Pen is quickly closing the gap on him. Mr Macron’s election campaign has been extremely short after he firmly placed himself at the centre of the EU’s efforts in trying to broker a peace deal between Russia and Ukraine. He has held several calls with Vladimir Putin and even travelled to Moscow to meet the Russian President, famously pictured sitting several metres away from each other.

France currently holds the revolving presidency of the European Council and Mr Macron himself is now seen as the EU mouthpiece following the departure of former German Chancellor Angela Merkel last year.

Ben Harris-Quinney, chairman of the Bow Group think tank, believes an presidential election win for Mr Macron could see him drive major changes throughout the EU and bloc as a whole.

He told Express.co.uk: “Following Merkel’s departure Macron has stepped up his pursuit of the European crown.

“Germany’s response to the Ukraine war has been muted and subtle, but Macron has sought to place himself at the centre of events.

“If he is re-elected he will seek to lead the narrative in Europe and accelerate the EU to its final form, the new Rome, a federal super-state.

“It will likely mean a period of great and swift change, as Macron and other Euro-federalists seek to seize upon the many current crises facing Europe as the opportunity to make the final key steps toward transition to a European super-state.”

Mr Macron has continued to put forward a proposal for an EU army, but this frequently been shot down by some member states.

But Mr Harris-Quinney still believes the creation of an EU army “is almost certain” to be a focus for Brussels in the near future, and Mr Macron will be central to that.

The political expert continued: “The Ukraine war has re-invigorated NATO, both in terms of its sense of purpose and unity.

“There is however a clear difference in the approach of EU nations to that of the US and UK.

“The EU clearly wishes to demonstrate unity and a strong defence against attack, but it also wishes to retain Russia as a trading partner and is more open to a peaceful settlement.

“The US and the UK want to rebuild the iron curtain and isolate Russia, which will jeopardise the EU’s energy supply among other partnerships.

“He added: “Whilst NATO is once again centre stage, many in the EU feel they need the ability to set a distinct approach and policy to the US, and the Ukraine war ultimately underlines that.

“An EU army is almost certain to be a focus for the EU in coming years, and if Macron is re-elected he will be the driving force behind it.”

Alistair Jones, Associate Politics Professor at De Montfort University in Leicester, also argued the EU could become even stronger if Mr Macron wins the presidential election, adding France has the chance to “shape the EU” for years to come.

The political expert toldExpress.co.uk: “Macron will want to be seen as the leader of a ‘free Europe’. With Merkel having stepped down and Britain having left the EU, there is an opportunity for France to set the European agenda.

“None of the other states are in a position to challenge France.

There is likely to be closer co-operation in security and defence as a result of the invasion of Ukraine, but not a complete EU army. Eurocorps – which is more about intelligence and logistics – may get bolstered.”

Professor Jones added: “France has an opportunity to shape the EU not just for the next five years, but more.

“The antagonism with the UK over the fishing licences, etc, will see a more robust response from the EU as a result of French pressure.”