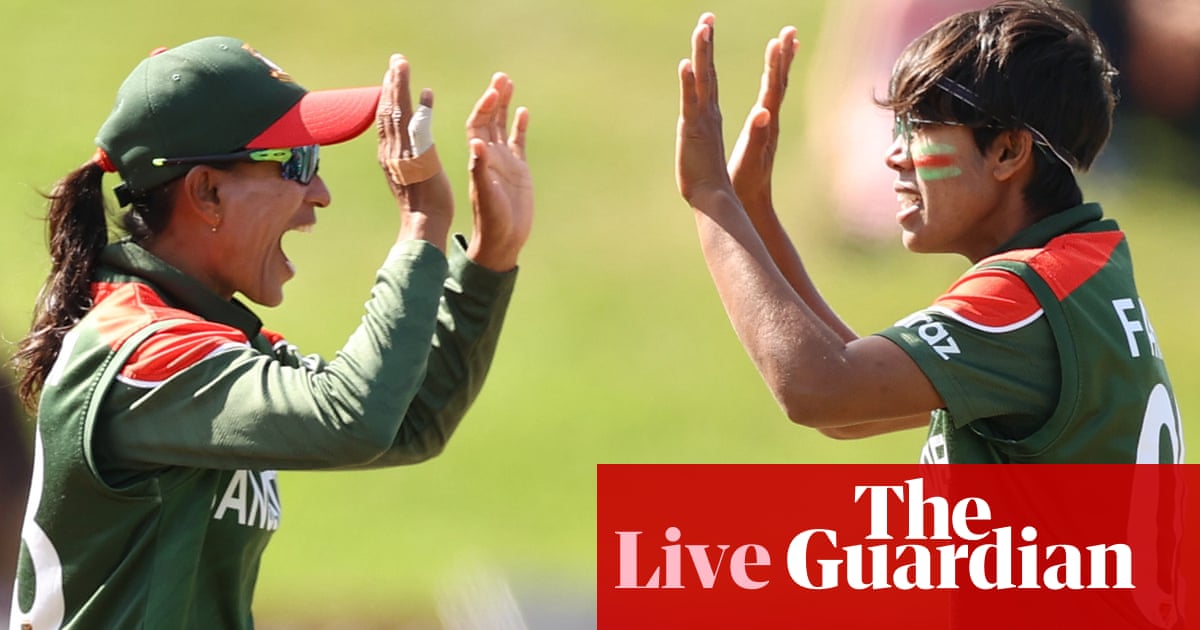 An excellent result by England who managed to turn around a terrible slump of form – the Ashes followed by losing the first three matches of this World Cup – just in time to scratch a way to the semi-final. Heather Knight remains an unappreciated inspirational captain, Dunkley a brilliant young cricketer and Ecclestone a superstar. I’m going to bed before I get sucked into South Africa v India – Deepti has just bowled a beauty and South Africa are 2-0 after two overs. Thanks for all the emails, see you on Wednesday at an ungodly hour!

Sophia Dunkley wins the player of the match award for that 67 off 72 balls on a slow pitch.

Bangladesh finish seventh in the table in their first World Cup, and with more exposure will come increased ambition.

And finally, Raf’s maths says that “England are through and probably 3rd. India would need to bowl South Africa out for 147* to overhaul them on NRR.” That chase is about to start over in Christchurch.

Ok – so as for the semi-finals… England join Australia and South Africa, and will be joined by one of India or West Indies, depending on the result in Christchurch later on today. If, as looks likely, India beat South Africa then we are looking at

but nothing is yet certain….

48th over : Bangladesh 134 all out (Jahanara 3) An over-pitched ball from Davies is cover-carved by Ritu for four, before she shovels to mid-off and that is that!

46th over : Bangladesh 128-9 ( Ritu 7, Jahanara 1) We glance at the England team who look as if they’ve all been put in cold storage. Katherine Brunt, incidentally, is no-where to be seen and has been off the field for two thirds of this innings.

India have finished 274-7 over in Christchurch. I will be getting back to you on the semi-finals, belatedly, too much happening!

Bangladesh fly for a quick single, Wyatt flings the ball in to Jones, who takes it a foot above the stumps but whips the bails off and Fahima is out by a nose.

45th over : Bangladesh 127-8 ( Ritu 7, Fahima 0) Dean finishes a productive over. On comms, Alex Hartley points out that if Dean pockets the last two wickets, she’ll have an international five-fer before Sophie Ecclestone.

Yorked! Nahida can’t get bat on a straight one and the stumps are coconut shied.

An emboldened Lata goes big but can only slop the ball to Cross at mid-on. Sweep to disaster in this game.

“Hi Tanya, just to say hi from Bahia! Got home now after a good night dancing to some great samba… just caught up with the score. All will be well right? Am not even gonna talk about the boys, the girls are gonna do it, aren’t they? Beijos Cressida”

Cressida, is Bahia, northern Brazil? One day I’ll come dancing in the small hours to the great samba with you. In the mean time, rest those dancing feet.

42nd over : Bangladesh 121-6 ( Lata 28, Ritu 4) A sudden glut for Bangladesh, and Lata, as two boundaries come off Davies over: a cut and a lofted drive which beats a stodgy jam roly-poly bit of fielding on the rope.

40th over : Bangladesh 108-6 ( Lata 17, Ritu 2) The boundary shackles are broken, as Lata pulls Davies to the rope. A vague run-out chance, but the throw isn’t pin-point and Ritu gets back.

Yet another top-edged sweep, yet another catch for Davies!

36th over : Bangladesh 96-5 (Lata 9, Salma 0) Tis Ecclestone, doing what Ecclestone does: long sleeves, flash of cream across her nose and… yes… another wicket! She currently has 3-15.

“Greetings from sunny Wellington! Very much enjoying my first ever Women’s ODI today, especially the way it seems to be going. Bangladesh are running out of time and ideas. Jones doing an exceptional job standing up to the stumps for Davies.

“Do we know yet which teams play at which venue in the semis? Hoping to come back on Wednesday to see England at the Basin but websites are being very coy about how it all shakes out!”

You lucky thing, Ed Kay – looks like a great atmosphere. As far as I know the semi-finals look like this (to be continued…)

35th over : Bangladesh 95-4( Joty 22, Lata 8) A mere single from Knight as the players gather for the last DRINKS break o the match. I think we can safely say England have won this game as Bangladesh plump for batting out the overs rather than risk-taking.

33rd over : Bangladesh 91-4( Joty 22, Lata 4) Heather Knight twirls her arm over, the wind buffeting her long-sleeved jumper. Tap, tap, tap, Bangladesh bundle through their singles as the dog side-eyes me for accidentally kicking her.

“Just trying to wake you up from Brisbane,” bellows Evelyn Williams, “where I’m following the OBO while preparing to go to an NRL game (Queensland derby – Broncos v Cowboys). Good time for us to watch the cricket but sometimes other sports interfere.”

Enjoy! And thanks for the ear tweak, my eyelids are definitely struggling tonight.

‘Hi Tanya,” Finbar Anslow, hello! “How are you doing, have woken up impossibly early having foolishly volunteered to help with the breakfast at a local boarding school, have also been fiendishly robbed of another hour’s sleep by some faceless beauracrat; please give me some good news.”

I hope you are rewarded with a beautiful dawn and freshly-brewed coffee. Good news, you say? In this tainted world, the best I can come up with is that England are going to make the semi-finals, having picked their campaign out of the dust. Shall we ignore events in Grenada?

Rumana flings the bat and gets only an inside edge onto the stumps. An offcutter to smooch to.

27th over: Bangladesh 75-3 ( Joty 14, Rumana 3)) A wicket for Dean and then a small flurry of runs as Joty flings the back and edges behind. Mine eyes are heavy – if you’re out there, do drop me a mail for a chat about this and that.

Step and drive to mid-on, where Sciver is lurking.

26th over: Bangladesh 69-2 (Pinky 11, Joty 11) Davies, in for the rested Shrubsole, hair tied back in a high ponytail, bounds in: a wide and three runs through mid-wicket and fine-leg. Some helpful confirmation from the radio – whichever of India or England win their game (assuming they do) by a bigger margin will avoid Australia in the semis.

25th over: Bangladesh 65-2 (Pinky 8, Joty 11) Joty sweeps a laggardly leg-side ball from Dean for four, and repeats off the last ball, with the same result.

24th over: Bangladesh 57-2 (Pinky 8, Joty 3) Freya Davies has a bowl in her first competitive game since February 8. Short steps, like a horse dancing, as she approaches the crease. Five dots, and just a couple off the last ball as Pinky tipples her off her pads.

23rd over: Bangladesh 55-2 (Pinky 6, Joty 3) Dean in her sunglasses zips through another over, and a watchful Bangladesh pick up four singles.