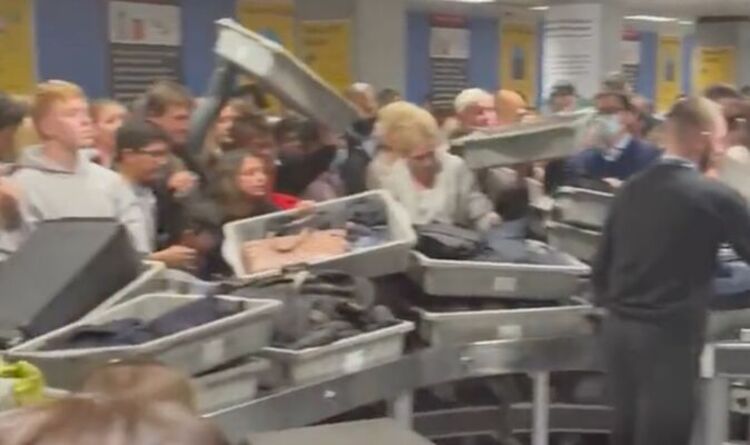 Thousands of holidaymakers were left deeply frustrated for a third day, as they were yet again confronted with huge queues at their points of departure. Travellers said on Sunday they had to wait three hours to check in their luggage at both Manchester and Heathrow airports this morning. The delays are being partly blamed on staff shortages, as some tourists were forced to sit for up to one hour on planes before taking off.

One person wrote on Twitter: “#manchesterairport 3+ hrs queues at check-in and security with no toilets or ventilation.

“Queuing lanes too dense and close together. A young girl passed out in the queue.

“We are not cattle!! @manairport take responsibility and sort it out!”

The holiday exodus began on Friday, as people headed to the borders in search of some well-earned relaxation.

However, travellers were confronted by hellish scenes of chaos and disorganisation.

A video posted to social media on Friday showed a packed-out security hall at Manchester airport with people desperately trying to get through.

Staff looked overwhelmed by the tidal wave of tourists attempting to board their planes.

She wrote: “@manairport you are an absolute disgrace! It was dangerous today, people will get hurt if you do not improve things.”

June van Hecke called on Manchester’s mayor to get involved and sort the problem out.

She said: “@ManchesterAirp my son has queued for 5 hours at Manchester airport he has an 8-year-old and a 5-year-old.

One of the worst-hit places has been Dover, with gridlocked roads near the port caused by disruption to cross-Channel ferries and bad weather.

The Chief Executive of the British Ports Association warned that things were unlikely to get better in the coming days.

Richard Ballantyne told BBC Breakfast on Sunday: “It is a bit better today, we understand. Yesterday we were up to nine-hour queues outside the port.”

However, he added: “East Kent and the Kent police services… and the very well established operations team at the Port of Dover are predicting this is going to continue for another couple of days.

“But it is something we just don’t know how long it’s going to go on for.”