Skip to content
HomeNews‘Disgraceful!’ Republicans slammed for ‘hurtful’ anti-Queen posters ahead of Jubilee 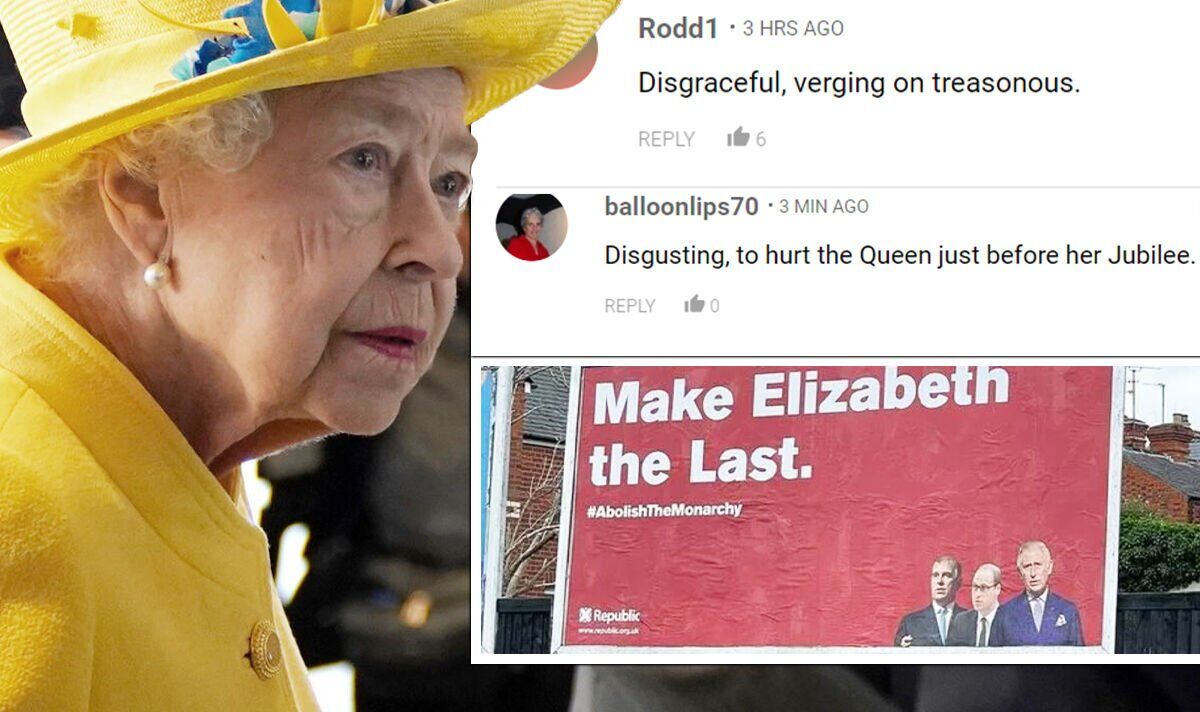 The posters were put up by the pressure group Republic, which is campaigning for the end of the British monarchy. The group raised £43,000 to fund the billboards using the fundraising platform Crowdfunder. The posters, which appeared in Aberdeen, Glasgow, Newcastle, Leeds, Liverpool, London, Bristol and Birmingham earlier this week, urged Britons to “make Elizabeth the last” British monarch.

Many Express.co.uk readers hit out at the posters, with one, Rodd1, describing it as “disgraceful.”

Another reader with the username Viking 2 agreed, writing: “Traitors.”

A third reader added: “Disgusting, to hurt the Queen just before her Jubilee.”

Boroboy274 described the posters as “disgraceful”, while Marden suggested the makers of the signs were “ungrateful”, adding: “How dare they!”

Meanwhile, one reader nicknamed Gobsmacker noted how well respected the monarchy is across the world.

They wrote: “Don’t be ridiculous – if you could see the monarchy through the eyes of those outside of the UK you’d see they have massive respect for the Royal Family.

“Certainly the majority of Brits support the RF as they can see what they provide Britain with.

“Just the usual minority screaming louder than the content majority – getting far too much media coverage for the worth of their message.”

They added: “Anne is the best of a bad bunch.”

The red posters read “Make Elizabeth the Last” in a big white font, with the hashtag #AbolishTheMonarch beneath.

Below the words are the faces of Prince Andrew, Prince William and Prince Charles.

Republic introduced the posters in July 2021 but campaigning has increased in recent weeks in the lead up to the Platinum Jubilee.

The pressure group has said the country needs to have a “grown up” debate about the monarchy.

It said: “As we approach the end of the Queen’s reign the country needs an honest, grown-up debate about the monarchy.

“We need to stop and ask ourselves: Can’t we just choose our next head of state?

“With polls showing young people wanting an elected head of state, the succession of King Charles will be a major turning point in the monarchy’s history and in the growth of Britain’s republican movement.