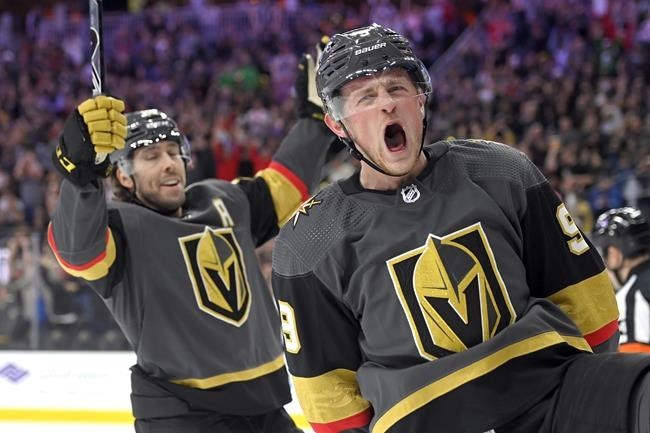 LAS VEGAS (AP) — Evgenii Dadonov had a goal and two assists and the Vegas Golden Knights defeated the Nashville Predators 6-1 on Thursday night in a game that included a frightening injury.

Golden Knights forward Brett Howden was wheeled off the ice on a stretcher after going into the boards headfirst near the Vegas bench. He was taken to a hospital and was in stable condition, the team said.

Shaking off a strange week that saw him traded to Anaheim at the deadline, only to have the NHL negate the transaction 48 hours later due to a no-trade clause, Dadonov scored his sixth goal in eight games and has 32 points this season.

Filip Forsberg scored for Nashville and Juuse Saros made 44 saves. Saros entered 4-2-1 with a 2.43 goals-against average, a .938 save percentage and one shutout against Vegas in his career.

Though the Golden Knights were able to celebrate a win that brought them within one point of third-place Edmonton in the Pacific Division, their victory was marred by a scary moment with 3:31 left in the first period when Howden was stretchered off after going down near the Vegas bench. The 23-year-old forward was battling for the puck with Forsberg before losing his balance and being inadvertently shoved into the boards headfirst.

Medical personnel brought a stretcher onto the ice and tended to Howden, who appeared responsive and raised one of his arms as he was taken off the playing surface after a nine-minute delay. The Golden Knights announced during the game that Howden was in stable condition at a Las Vegas hospital.

Janmark put Vegas on the board 1:31 into the game with a redirect from the high slot off Pietrangelo’s shot from the blue line.

Roy increased the lead later in the period when he gathered a loose puck in the center of the right circle, turned and fired it past Saros in one swift motion.

On a power play in the second period, Dadonov sent an appreciative crowd that welcomed him back with a roar during pregame introductions into another frenzy when he buried a loose puck in front with a backhand.

Forsberg ruined Thompson’s bid for a shutout when he tapped home Roman Josi’s pass across the slot for a power-play goal. With the assist, Josi tied his career high with a point in his 12th straight game.

Eichel pushed the lead back to three when he squeezed through two defenders and found space inside the near post for the Golden Knights’ second power-play goal of the period.

Stephenson and Pietrangeo put an exclamation point on the win with goals late in the third.