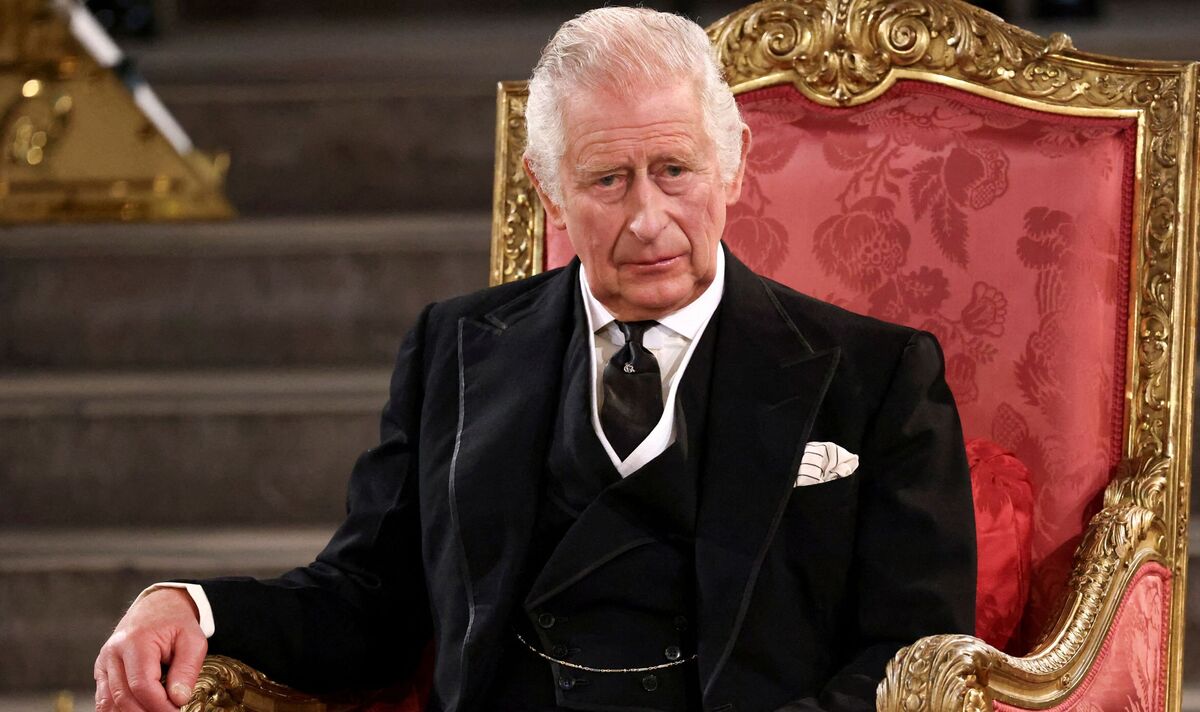 King Charles III “insisted” on meeting Prince Harry and Meghan Markle before they held their audience with Queen Elizabeth II in April, according to a royal author. In her new book The New Royals, royal commentator Katie Nicholl claimed the then Prince of Wales wanted to prevent his younger son so he wouldn’t “sweet-talk” the 96-year-old monarch.

In an edited extract published by Vanity Fair, Ms Nicholl wrote: “Charles insisted on meeting Harry and Meghan before their audience with the Queen.

“According to one insider, he wanted to make sure Harry wouldn’t be able to sweet-talk her the way Andrew had and get her to agree to anything without Charles’s say-so.”

Ms Nicholl added the meeting between Charles, Camilla, the now Queen Consort, Meghan and Harry was “more awkward” than the one held later between the Duke and Duchess of Sussex and the Queen.

She claimed: “The Sussexes were late, and Charles had just 15 minutes with his son and daughter-in-law before he had to leave for the Royal Maundy Service at Windsor Castle, where he was standing in for the Queen for the very first time.”

While there were “moments of tensions” according to Ms Nicholl, she also reported a source claiming father and son hugged and greeted each other warmly.

This meeting behind closed doors between Charles, Camilla and the Sussexes took place in April.

At the time, Meghan and Harry stopped over in Windsor while on their way to The Hague for the Invictus Games.

Prince Harry did not publicly speak about his meeting with the now sovereign but discussed seeing the Queen during an interview with US broadcaster Hoda Kotb.

Asked how it had been to be reunited with his grandmother several months after his last trip to the UK, Harry said: “It was great. It was really nice to see her.

“To be able to see her in some element of privacy was nice.

“I hadn’t had the chance to go back the UK for couple of years apart from those two times.

“One for my grandfather’s funeral and one for unveiling a statue of my mum.”

He added: “Being with her, it was great. It was just so nice to see her.

“You know, she’s on great form. She has always got a great sense of humour with me and I’m just making sure she’s protected and has got the right people around her.”

Harry saw the Queen once again in person a few weeks later, when he returned to Britain with Meghan and their two children to celebrate the Platinum Jubilee celebrations with the rest of the Firm.

The Duke and Duchess were on British soil as Her Majesty died on September 8 as they were visiting a number of events linked to organisations close to their hearts.

This coincidence allowed the Sussexes to immediately join the rest of the Royal Family in mourning and even step out in Windsor for a walkabout with the new Prince and Princess of Wales on September 10.

Together, they viewed floral tributes and messages for the late sovereign and thanked mourners and royal fans for their support.

Among other public appearances made during the period of national mourning, Prince Harry took part in a 15-minute-long vigil at Westminster Hall alongside William and their six cousins.

Meghan and Harry also attended the televised funeral service at Westminster Abbey and the following committal service at Windsor Castle, with the Duke joining his father, brother and other members of the Firm in the funeral procession.

Harry, who flew back with Meghan to the US after the funeral to be reunited with their children, also issued a personal statement to mark the Queen’s death.

Shared on the website of the Sussexes’ organistation, Archewell, the Duke wrote: “Granny, while this final parting brings us great sadness, I am forever grateful for all of our first meetings — from my earliest childhood memories with you, to meeting you for the first time as my Commander-in-Chief, to the first moment you met my darling wife and hugged your beloved great-grandchildren.

“I cherish these times shared with you, and the many other special moments in between.

“You are already sorely missed, not just by us, but by the world over.

“And as it comes to first meetings, we now honour my father in his new role as King Charles III.”