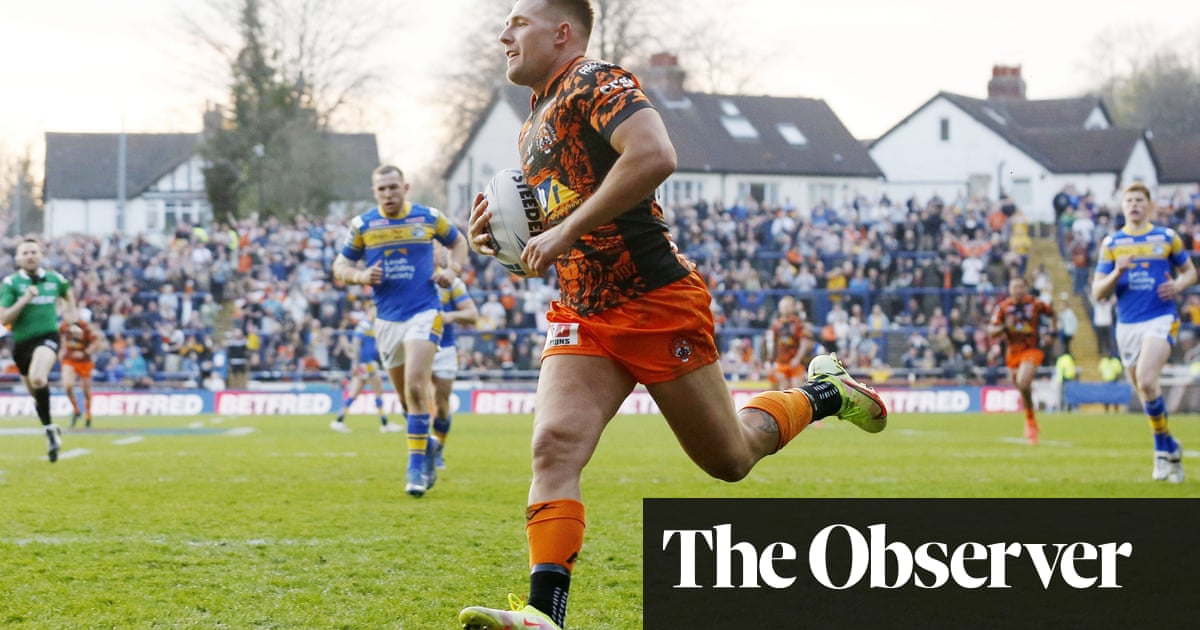 There is a moment in time when this slump for Leeds will come to an end. The only issue for the Rhinos and their next head coach is that moment does not appear to be on the horizon. The Challenge Cup was billed as a respite from their struggles in Super League but by full-time here, this had a worrying similar feel to so much we have seen from one of rugby league’s most famous clubs in 2022.

Any notion of Leeds setting up a quarter-final tie with Hull KR was all-but out of the question by half-time as the defensive frailties that have haunted the Rhinos this season were brutally exposed.

Leeds were visibly off the pace during a first-half in which they conceded 28 points without reply but the Tigers were at their best in attack.

Their five tries were a combination of clinical finishing, such as the offload from Liam Watts that led to Gareth O’Brien’s effort, and a series of harrowing errors in defence from the Rhinos. Time and time again they missed tackles, epitomised by the game’s opener that led to Jake Trueman breaking the deadlock.

“The underlying problems, they’re going to take a while to solve,” said Jamie Jones-Buchanan, their interim coach. “Some of the problems are habitual, some are cultural, some players haven’t been put under a blowtorch enough.”

It is a damning indictment from one of Leeds’s most revered players, who will almost certainly still be in charge for Friday’s visit of St Helens as the Rhinos scour the world for Richard Agar’s replacement after he departed on Monday.

Jake Mamo and O’Brien crossed after Trueman and even at 16-0, the game felt almost beyond the Rhinos despite the game barely being half an hour old.

The tie was then put beyond doubt in during a crucial few minutes before half-time. Leeds’s Brad Dwyer was sent to sin-bin and Castleford scored two further tries courtesy of Jordan Turner and George Lawler to make it 28-0.

“As far as first halves go, we were outstanding,” the Tigers’ coach, Lee Radford, said. After a difficult start to the season, Castleford’s recent performances have suggested they could improve before Leeds and this afternoon ruthlessly underlined that.

Back-to-back tries from Rhyse Martin and Liam Sutcliffe after the restart briefly offered Leeds hope, but that was extinguished when Greg Eden intercepted a tame Aidan Sezer pass to put the Tigers back in control.

How do I sign up for sport breaking news alerts?

Martin scored again, but by then it was too late for any late dramatics, particularly given the frailties that visibly hang over Leeds. Fittingly, Castleford rounded off the scoring courtesy of Eden’s second and by then almost all of the Leeds support had headed for home.

In Saturday’s other ties, holders St Helens overcame resistance from Championship part-timers Whitehaven to secure a 46-4 victory. The champions had a few uneasy moments in the early stages but their extra fitness and finesse eventually proved too much for the home side as they cruised through with eight different tryscorers.

Catalans were pushed all the way by a spirited Featherstone in Perpignan and left it late to book their place in the quarter-finals with a hard-fought 27-14 win. Tries in the last 20 minutes from Tyrone May and Tom Davies spared the Dragons’ blushes against a rugged and resilient Rovers.

Hull KR earned their spot in the next round via a tough 24-18 victory over Leigh Centurions. The 2015 Wembley runners-up needed the inspiration of half-back Mikey Lewis to turn the tie in their favour after Leigh dominated the first 20 minutes.

A Jake Connor masterclass and Connor Wynne’s hat-trick helped Hull FC ease into the last eight for an eighth season in a row following a 58-12 triumph at Championship side Sheffield Eagles.