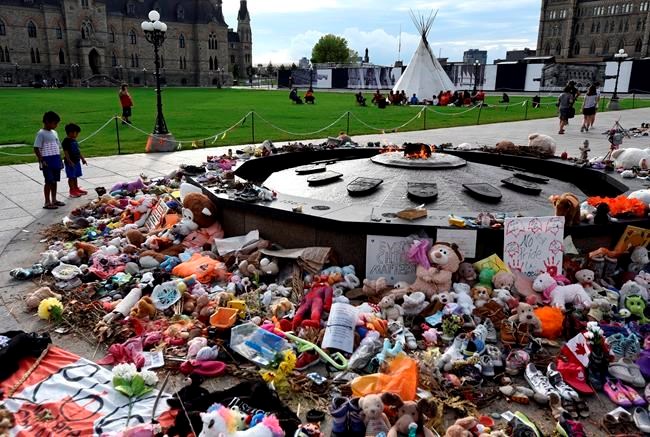 Ottawa is eyeing a five-year timeline to build a national monument to honour children who suffered its residential schools system.

Construction of a memorial in the national capital was listed as one of the calls to action in the final report from the Truth and Reconciliation Commission of Canada.

It collected testimony from thousands of Indigenous people forced to attend church-run, government-funded institutions as children.

They were separated from their families, stripped of their culture and suffered various forms of abuse.

The National Centre for Truth and Reconciliation, which holds residential school-related records, recently issued a call to survivors and their children, saying the federal Canadian Heritage Department seeks applicants to be part of a steering committee to guide creation of a monument.

The posting says the initial planning through to completion would be a five-year process.

Canadian Heritage did not respond to a request for comment on the timeline, saying only that once a steering committee is nominated, an official announcement would be made.

The call for Ottawa to build a national monument honouring residential school attendees was included in the Truth and Reconciliation Commission’s final report in December 2015.

A day-and-a-half workshop regarding the project was held in 2019 with survivors and others from the commission.

It wasn’t until last August that the federal government dedicated funding to the memorial. It pledged $20 million after First Nations in Saskatchewan and British Columbia discovered unmarked graves at the former sites of residential schools, which touched off a countrywide reckoning about how Canada treats Indigenous children.

This report by The Canadian Press was first published March 30, 2022.