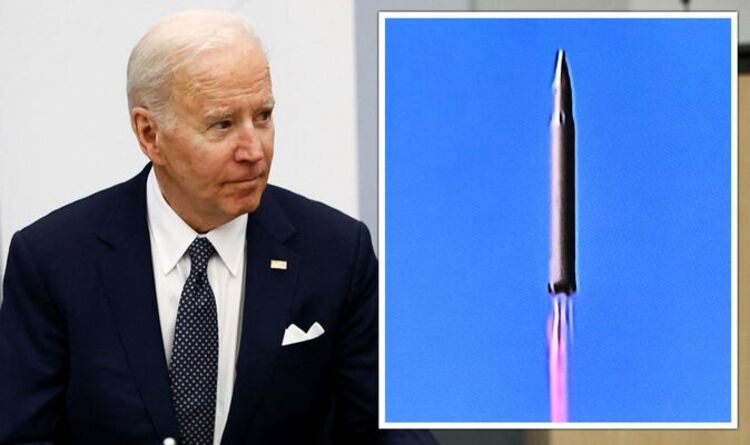 North Korea launched a new powerful intercontinental ballistic missile (ICBM) for the first time since 2017 on Wednesday, according to neighbouring countries. ICBMs are primarily designed for nuclear weapons delivery and support multiple independently targetable reentry vehicles (MIRVs). This allows a single missile to carry several warheads, each of which can strike a different target.

The move from tyrant leader Kim Jong-Un put world leaders on red alert – including South Korea, that conducted a live-fire test of ballistic and tactical missiles immediately after.

President Moon said North Korea’s test was a “breach of the suspension of intercontinental ballistic missile launches promised by Chairman Kim Jong-un to the international community.”

He added: “It poses a serious threat to the Korean peninsula, the region and the international community.”

Makoto Oniki, Japan’s state minister for defence, said: “Our current analysis indicates that the ballistic missile flew for 71 minutes and [at] around 3.44pm [6.44pm GMT] it landed in waters within Japan’s exclusive economic zone in the Sea of Japan about 150km [93 miles] west of Hokkaido’s Oshima peninsula.

“Given that the ballistic missile this time around flew at an altitude of more than 6,000km, which was much higher than the Hwasong-15 ICBM that was launched in November 2017, [this one] is believed to be a new ICBM.

“At a time when the world is dealing with Russia’s invasion of Ukraine, North Korea is pressing ahead with launches that unilaterally aggravate provocations against the international community, which is absolutely unforgivable.”

Kim Dong-yub, a professor at Seoul’s University of North Korean Studies, said flight details suggested that the missile could reach targets 9,320 miles away – bringing the entire US mainland “into striking distance”.

Britain, the US and other western allies have called for a security meeting over the move.

It has also sent tensions with South Korea and Japan soaring.

In the event of a sudden destabilisation of the North Korean regime – the US does have a plan to launch Operation Plan 5029.

The classified mission, headed up by the former commander of US Forces Korea (USFK), General Robert Bruce Abrams, would ensure that the state’s nuclear missiles were not set off during a power struggle.

Little is known about the exact details of the covert operation, but it is said to also secure the border.

The existence of OPLAN 5029 was first publicly acknowledged by the US military in 1999, when General John H. Tilelli Jr, then commander of USFK, responded: “It would be unusual if we didn’t have one.”

But Vipin Narang, a North Korea nuclear specialist at MIT, sent a warning about the possibility of provoking World War 3 if the plan is rolled out.

He said: “The million-dollar question is: When do you invoke the OPLAN and what indicators do you rely on to do so?

“Because one country’s`securing the country´operation can look to the other nation like an invasion plan.

“And then, all hell can break loose.”

The biggest worry for the US government is North Korea’s nuclear stockpile being used, stolen or sold.

Ralph Cossa, president emeritus of the Pacific Forum added in May: “If the US does not have plans to go in and secure and retrieve North Korean nukes – to the extent we know where they – then we are not doing our job.

“Beyond that, it makes little sense for the US and/or South Korea to get involved in internal North Korean power struggles.”