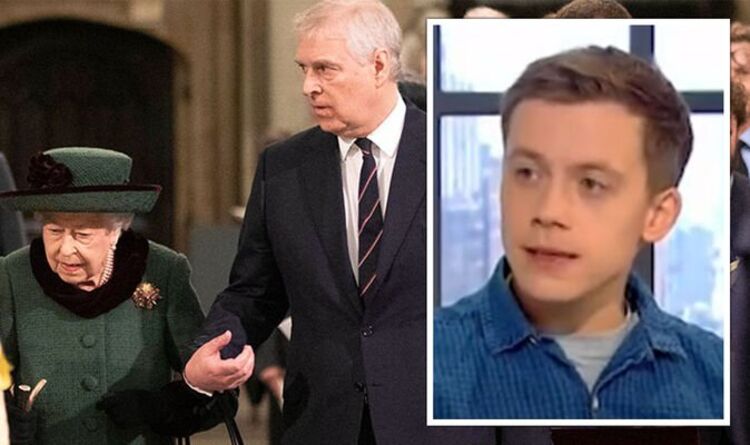 The Queen has signalled her support for the Duke of York by arriving with her disgraced son for the Duke of Edinburgh’s memorial service which paid tribute to a “remarkable man”. Andrew provided a steady arm for the Queen as she walked into Westminster Abbey to remember the life of her husband, a few weeks after reaching a multimillion-pound out-of-court settlement in a civil sexual assault case after strongly denying the allegations made against him. Political commentator Owen Jones has lashed out at Andrew for his friendship with Jeffrey Epstein.

Speaking on the Jeremy Vine show, Mr Jones said: “I don’t know the internal workings of the British monarchy and I don’t think most people do except for people are the very top but I have an old-fashion view of this, if you don’t want to end up being barred from public life, don’t associate yourself for many years with a paedophile and a rapist.

“Don’t end up in a situation where you’re settling millions of pounds to a survivor who has publicly accused you of rape.

“But that’s the situation he’s in.

READ MORE: Royal POLL: Should Queen have allowed Prince Andrew to escort her?

“A vast majority of people aren’t in public life. No one’s saying you should be barred from your dad’s funeral obviously even people who commit the most gross crime should be allowed to go to their parents’ funerals.

“The issue is being given a ceremonial role.

“The Queen was completely to allow that to happen and even though, Prince Charles and Prince William rightly objected to it, I think more should have been done.”

Andrew’s role at the memorial service has raised the prospect of Andrew putting in an appearance during the Platinum Jubilee weekend.

“Although the Queen is head of state, she is also head of the family as well and in that capacity all her children should be with her.”

He added the royal family may take stock following the media’s response to Andrew’s role at Philip’s service.

Mr Little said: “It is a hard one to predict. It will depend on how the royal family react to some of the newspapers’ front pages today.

“Of course, they’re not known to react in the way that you think they might.”