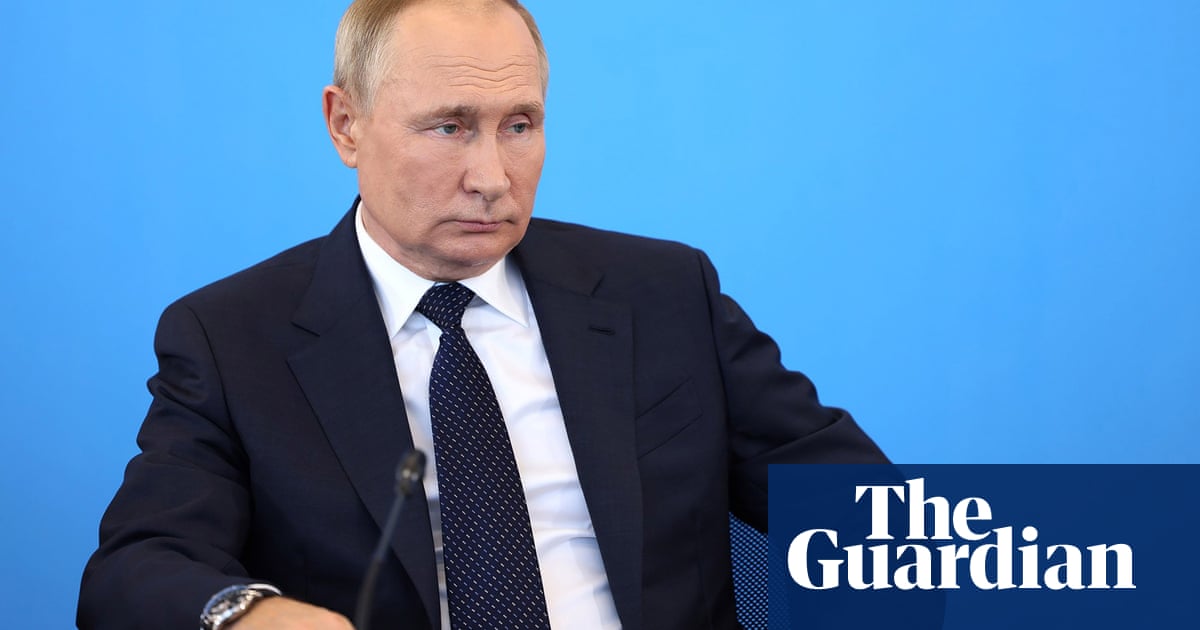 Your leader (The Guardian view on Putin’s military escalation: a failing strategy, 21 September) and Keir Giles (Putin is admitting his previous threats were hollow by saying ‘this is not a bluff’, 21 September) both rightly urge continuing support for Ukraine against Russian aggression.

Does anyone really believe that if Vladimir Putin had got away with Russia occupying Ukraine in a matter of weeks, that would have been his last territorial demand?

One of the many differences from the 1962 US-USSR Cuban missile crisis is that, however powerful Nikita Khrushchev was as head of the Soviet Communist party, he was nevertheless responsible to his politburo colleagues in any deal negotiated with the US. Indeed, two years later they dismissed him. All the indications now are that Putin alone decides on all major issues, and that of course makes the situation much more dangerous.David WinnickLondon

Liz Truss has dismissed Vladimir Putin’s threat as a sign of desperation. I am worried that this approach will only serve to make a desperate Putin more so, and more determined to achieve his stated goal. He is backing himself into a corner and, as Emmanuel Macron has said, needs to be offered a way out in order to reduce the likelihood of many more lives being lost.

Elementary psychology suggests that further humiliation of a desperate man who has weapons at his disposal is the wrong approach. Pat Brandwood Poole, Dorset

Following Vladimir Putin’s recently repeated threats (Biden denounces Putin’s nuclear threats as ‘reckless’ in UN address, 21 September), should we be concerned that the UK has no civil defence plans in the event of his launching a nuclear attack? The absence of any would seem to indicate that there is nothing effective that can be done.

If the UK government were to explain this to the public, we might all become more vocal about current government policy of being willing to launch a pre-emptive nuclear strike. This would certainly ensure nuclear retaliation which, seemingly, the government accepts would totally destroy our nation. Robert ForsythDeddington, Oxfordshire

I think we may need to be clear that, right now, the issue is all about so-called battlefield nuclear weapons, not a strategic exchange of ballistic nuclear arsenals. The fact is, with any move towards battlefield nuclear weapons or WMDs, Russia will immediately lose China, its most valuable ally – then others including India. In fact, Vladimir Putin will lose everything.Dr Paul DorfmanUniversity of Sussex

While one can only salute Russian anti-war protesters and recognise that Vladimir Putin has imperial ambitions over a part of Ukraine, one does wonder if President Joe Biden, who refers to Putin’s “imperial ambitions”, can recall what the US was doing in Afghanistan and Iraq in recent decades?Keith FlettTottenham, London

We told ourselves last week that we were living through a moment of history. If Vladimir Putin really does mean it this time (Putin flirts again with grim prospect of nuclear war – this time he might mean it, 21 September), I fear we might well find ourselves history.John Bailey St Albans