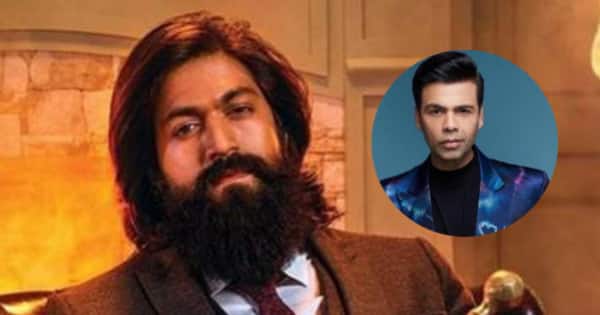 KGF Chapter 2 trailer launch was held in Bangalore a couple of hours ago. Rocking star Yash alongside the rest of the cast – Srinidhi Shetty, Raveena Tandon, Sanjay Dutt, Prashanth Neel and others had graced the trailer launch. Karan Johar took over the hosting duties alongside Anushree. Karan talked about how regional cinema is appealing and catering to everyone across the globe. Karan added that with the same, it has now become one where the films are no longer being recognised based on the region produced. The whole entertainment industry has become one. Karan also joked about the ‘woods’ of the entertainment industry. (Bollywood/Tollywood,etc). Also Read – Trending South News Today: RRR ‘ROARS’ past 300 crore, KGF 2 trailer is kickass and more

And with reference to the same, Yash gave it a KGF touch. Since the release of KGF Chapter 2 is days away, the Rocking star said “Let’s burn all the woods.” The response to the trailer of KGF Chapter 2 has been amazing. Yash starrer movie is one of the most anticipated films of the year. It was delayed due to the COVID-19 pandemic. KGF Chapter 2 is written and directed by Prashanth Neel and produced by Vijay Kiragandur under the banner Hombale Films. At the trailer launch event, the director was also asked whether there will be the third instalment of KGF to which the director said that he wrote the story of KGF 8 years ago and joked that everyone would have to wait for it, for another 8 years. Also Read – KGF 2 trailer launch: Sanjay Dutt asked Yash to not ‘insult’ him and the reason will leave you SHOCKED!

Coming back to the KGF Chapter 2 trailer launch, it was also attended by Malayalam star Prithviraj Sukumaran who is distributing the Malayalam version of the film. At the launch, also present was Radhika, Yash’s wife. KGF Chapter 2 is going to release in the Kannada language with the dubbed versions of Telugu, Hindi, Tamil and Malayalam languages. Also Read – KGF 2 trailer launch: Yash receives special message from RRR star Ram Charan who calls him a ‘SENSATION’