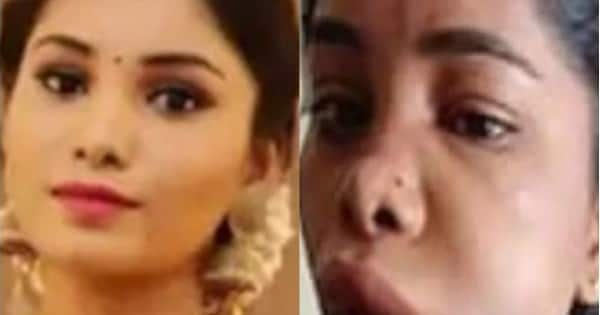 Kannada actress Swathi Sathish went through a root canal, but it has left her face swollen and she looks recognisable. The picture of the actress has gone viral on social media. Reportedly, after the root canal surgery, a person’s face gets swollen, but Swathi’s face has been swollen even after 20 days of the procedure. According to reports, the actress has stated that her dentist had informed her about this common side effect and told her that the swelling will go away in a few hours, but her face got worsened. Also Read – Ranbir Kapoor goes on his knees for Shraddha Kapoor after romancing her on a beach [Watch Leaked Video]

According to a Kannada news channel, the actress has accused the clinic of medical negligence and is reportedly she is considering taking a legal route against them. A then-and-now picture of Swathi has gone viral, but the insensitive netizens are trolling her. Also Read – Tejasswi Prakash to Shehnaaz Gill; you will be SHOCKED to know the FIRST salary of these TV queens

Well, it is said that due to her swollen face, Swathi is not able to step out of her house, and this has also affected her professionally as she is not able to promote her upcoming which is slated to release soon. The actress is known for her performance in movies like FIR and 6 to 6.

Reportedly, the actress is getting treatment for her swollen face from another clinic, and she is recovering. Let’s pray for a speedy recovery of Swathi.

Last month, popular Kannada TV actress Chethana Raj, passed away because of complications she faced after a failed plastic surgery. Reportedly, The 21-year-old actress had undergone fat-free cosmetic surgery at a private hospital in Bengaluru. Raj’s parents had accused the hospital of medical negligence.