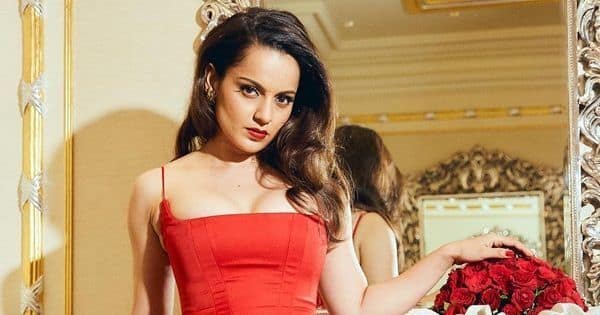 Kangana Ranaut has often sparked debate on nepotism and star kids. She had openly raged a war against Bollywood celebs such as Karan Johar, Alia Bhatt, Hrithik Roshan among others. This time around, she has come down hard on star kids while criticising them and said that they look like boiled eggs. Also Read – Kangana Ranaut complains that Ajay Devgn will never promote her films; reveals Akshay Kumar called her secretly after Thalaivii

While talking about what makes south cinema more successful than Bollywood, Kangana said that the audience finds it difficult to connect with star kids because they study abroad, talk in English and watch Hollywood films. “The way they have a connect with their audience, it is very strong. I wouldn’t say fans, it’s much more than that. With us what happens is that their (stars’) kids go abroad to complete their studies. They talk in English, watch only Hollywood films. They eat only with knives and forks and talk differently. So, how will they connect? Dekhne me bhi ajeeb se aise lagte hai jaise uble hue ande (They even look weird like boiled eggs). Their entire look has changed so people cannot relate. I don’t mean to troll anyone,” Kangana told ABP Live. Also Read – Trending Entertainment News Today: Kangana Ranaut REACTS to Mahesh Babu’s ‘Bollywood can’t afford me’ remark; Katrina Kaif’s pregnancy rumours and more

Citing the success of Allu Arjun‘s Pushpa: The Rise, Kangana added, “Look how Pushpa looks like someone we know. Every labourer is able to connect with him. Tell me which of our heroes can look like a labourer in today’s times? They cannot. So, their culture (of South Indian film industry) and their grounded nature is paying them off. I hope they don’t start taking inspiration from the West. It’s important to stay connected to people within your country.” Also Read – The Kapil Sharma Show: Kangana Ranaut reacts after the comedian makes fun of her nepotism rant and fight against celebs [Watch Video]

Kangana is currently gearing up for the release of her upcoming action film Dhaakad. After Salman Khan shared the trailer of Dhaakad on his social media, the actress expressed her gratitude towards Dabangg Khan. “Thank you my Dabangg hero heart of gold. I will never again say that I’m alone in this industry� thank you from entire Dhaakad team,” she wrote on Instagram.

Recently, megastar Amitabh Bachchan had also shared the song She’s On Fire from Dhaakad but later deleted his post. Reacting to the same, Kangana told a YouTube channel that she finds it a bit weird as why would a star of Mr Bachchan’s stature would do this. Dhaakad features Kangana as Agent Agni in the lead role with Arjun Rampal, Divya Dutta and Saswata Chatterjee in supporting roles.