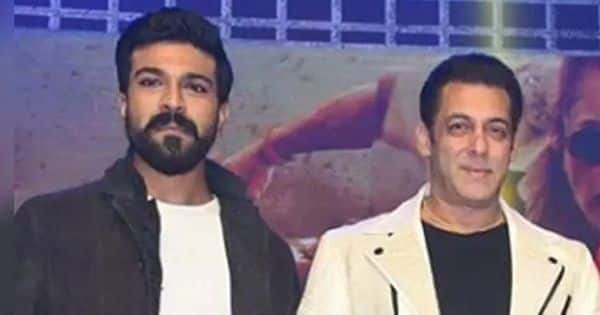 Salman Khan‘s upcoming film Kabhi Eid Kabhi Diwali has been in the news, be it from the Dabangg Khan’s fallout with Sajid Nadiadwala to reshuffling of the cast. So far, it has been reported that Shehnaaz Gill, Raghav Juyal, Palak Tiwari, Siddharth Nigam and Jassie Gill have joined the cast besides Venkatesh and Pooja Hegde. If the latest report is to be believed, RRR star Ram Charan is now the latest addition to Salman’s much-awaited film. Also Read – From Kartik Aaryan to Kareena Kapoor Khan; Karan Johar’s friends turned foes to become friends once again

According to Pinkvilla, Ram Charan has been roped in for a special cameo in the film. When Salman was shooting for a special song in Hyderabad, Ram dropped by to meet the superstar on the sets. The makers then came up with the idea of getting Ram to appear in the song. Also Read – Kabhi Eid Kabhi Diwali to Kick 2; Salman Khan’s upcoming movies in 2022 and 2023

“Salman Khan was shooting for a larger than life song yesterday in Hyderabad, when Ram Charan went to meet the actor. It was then when they came up with the idea of Ram making a cameo in the song, which the actor graciously agreed to. It’s an exciting number, mounted on a massive scale, and Salman and Ram’s camaraderie in it is to look out for,” a source was quoted as saying by the entertainment portal. Also Read – Salman Khan’s Wanted, Akshay Kumar’s Bhool Bhulaiyaa, Aamir Khan’s Ghajini and more South remakes that set cash registers ringing

The report says that Salman is expected to wrap up the film’s Hyderabad schedule in a week and then return to Mumbai to shoot for the remaining portions. “Ram Charan and Salman Khan’s bond goes back a long way, and they were happy to collaborate on this one,” the source added.

A few days ago, it was reported that Pooja Hegde has commenced shooting for the second schedule of Kabhi Eid Kabhi Diwali. She will be stationed in Telengana’s capital city until the schedule ends on June 21. There are two foreign schedules on the cards for Kabhi Eid Kabhi Diwali, which will be finalised soon.

Last month, Salman had dropped the first look from his next film which showed him holding a steel rod that hides his face. Holding the rod with his turquoise bracelet clad hand, Salman looked seeped in his action spirit as he sports long hair and a pair of black sunglasses.