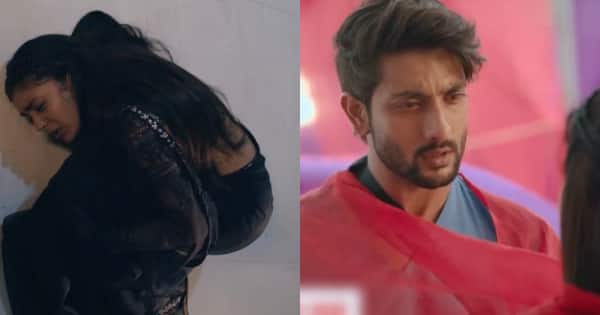 Imlie upcoming spoiler: Sumbul Touqeer Khan, Fahmaan Khan starrer TV show is going to see a shocking twist in the upcoming episodes. Narmada, that is, Aryan’s mother will make shocking allegations about Imlie aka Sumbul Touqeer. Yes, you read that right. It is all thanks to Neela aka Badi Maa who brainwashed Narmada against Imlie. It so happened that Aryan (Fahmaan Khan) was shot by an assassin while taking the report from Madhav. The assassin was there to take proof from him but Aryan didn’t let go as he didn’t want to disappoint Imlie. Also Read – Anupamaa actress Aneri Vajani reunites with Yeh Rishta Kya Kehlata Hai’s Mohsin Khan after 8 years for a project [VIEW PICS]

Imlie will take Aryan to the hospital and soon everyone from the Rathore family will join in worrying about Aryan’s health. Aryan will be in the need of B negative blood. Imlie will put all her efforts into getting the blood. It turns out Jyoti had bribed the ward boy and hence, Imlie had to go away from the hospital to get the blood donor. Jyoti grabs the opportunity and brings the blood donor. Narmada who has been brainwashed by Neela, seeing Jyoti’s efforts and Imlie’s absence feels Imlie is not fit for Aryan. When Imlie returns, she is happy that the blood has been arranged. However, a rude shock awaits her when Narmada accuses her of using Aryan to move ahead in her career. Narmada also brings Aditya Tripathi into their conversation and alleges that she first used him and is now using Aryan. Also Read – Sarkaru Vaari Paata Day 1 box office collection: Mahesh Babu proves nobody can take his ‘money’; mints Rs 50 crore gross

Imlie is heartbroken as Narmada asks her to stay away from Aryan. Her emotional breakdown has become the talk of the Twitter town. Fans are bowled over by Imlie aka Sumbul Touqeer Khan’s acting chops. Check out the tweets here: Also Read – Shah Rukh Khan’s old video of never leaving Bollywood goes VIRAL amid Mahesh Babu- Hindi films controversy

Kisi aur ke oscar ka pata nahi, give Sumbul her oscar, man .
I have been having sudden pangs of crying since the morning. ????
Bebe had me wailing.#imlie #SumbulTouqeer #Arylie pic.twitter.com/MfCNl6Uw9p

Why should I cry alone ….
everyone should cry with me ??

No words in any dictionary to describe Sumbul’s hardwork and talent, she is coming from another world to set the unmatchable standard of excellence level….Go going my princess ??no one can match & catch you??❤️❤️??#imlie#SumbulTouqeerKhan https://t.co/QcX8MFWT0p

@TouqeerSumbul you are such a phenomenal actor❤
You just live your character and gives the best of it with utmost perfection!
No words will be enough to praise you!!
You are one of the best and finest actor i have seen in ITV❤
Lots of love?#Arylie #imlie #SumbulTouqeerKhan https://t.co/pVYPuWg46A

I was just crying during this whole scene.
The way she was totally shaken by the words of Narmada. She really thought that bcoz of her Aryan gets hurt everytime.
And on that bheji thi dua song playing at the back ??@TouqeerSumbul u were fire ?
U just nailed the scene#imlie pic.twitter.com/j7ylEnnfjk

My dil Hurts to see her like this? @TouqeerSumbul I have no words How beautifully you portray #Imlie …#Arylie | #AryanSinghRathore pic.twitter.com/mDgD4neL0D

This girl will go places.
What a phenomenal performance @TouqeerSumbul ???#Imlie pic.twitter.com/e3nCSsIAZ8

Two scenes, both heart wrenching,both times she’s traumatized. How easy for the world to blame a girl for everything that happens around.
The first one attached me emotionally to Imlie and the second one makes me hate for that.@TouqeerSumbul what a gem you are girl..?#imlie pic.twitter.com/uliiKvZcAj

On the other hand, in the next episode of Imlie, we will see Aryan meeting Imlie. The latter asks her why he does so much for her. Aryan counter-questions as to why she kept quiet when his mother accused her of all those things. How will Arylie solve this problem?