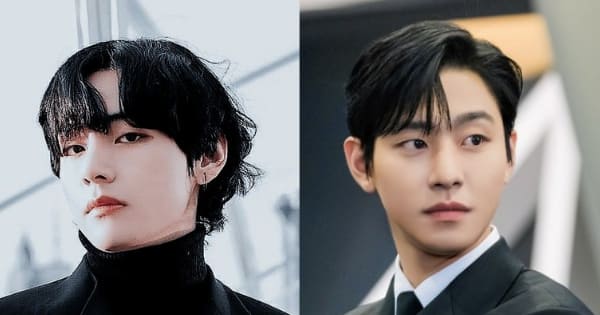 BTS and Business Proposal seems to have a link. BTS ARMYs have found a link between the characters of Business Proposal and two of the BTs members – Jungkook and (Jeon Jungkook) V (Kim Taehyung). Yes, you read that right. A couple of days ago, we had shared a video wherein an ARMY had found similarities between JK and Kim Min-kyu’s Cha Sung-hoon’s look. Jungkook’s video in glasses went viral and ARMYs couldn’t stop talking about how much he and Sunghoon looked alike. And now, they have found similarities between BTS V aka Kim Taehyung and Kang Tae-Moo aka Ahn Hyo Seop. Yep, you read that right. Also Read – BTS songs Blood Sweat & Tears, Dynamite gets mentioned in Business Proposal’s latest episode; ARMY reacts

We came across a video in which similarities between Taehyung and Tae-moo has been highlighted. From the way they both take off their jackets to golf, to the way they smirk, Tae-moo is a lot like Tae-tae. Their styling is also similar sometimes. The ARMY who edited the video also shared some clips of Taetae and Tae-moo in formals. Even their expressions of shock or the way they eat are similar. That’s just one portion of the video. We have more visuals comparing Taetae and Taemoo. Also Read – BTS: Old video of Jungkook calling himself ‘super antibody’ goes viral after he tests COVID positive

The video clip also includes similarities between Jungkook and Sunghoon. From the way they work out to their geeky look and their way of brushing their hands through their hair. Let’s check out the video below: Also Read – Trending Hollywood News Today: BTS star Jungkook tests COVID-19 positive, Will Smith apologises to Chris Rock for slap incident at Oscars 2022 and more

Interestingly, BTS and Business Proposal conversation started when Jungkook revealed that he had been binge-watching the episode of the series. The director of Business Proposal, Park Seon-ho, was shocked and grateful to Jungkook and had given a spoiler saying not to be surprised to hear his name in the series. Interestingly, in the latest episode of Business Proposal, BTS’ songs Blood Sweat & Tears and Dynamite were mentioned. ARMYs went crazy over the cute choreography of the songs performed by actor Lim Ki-hong.