The Desi BTS ARMY is tripping over the fact that BTS member Jimin knows about Indian Food called Biryani right now and they have taken Twitter by storm over the same. Bangtan Boys – RM, Jin Suga, J-Hope, Jimin, Taehyung and Jungkook – are quite popular across the globe and their popularity is ever-rising in India too. The Desi BTS ARMY has been organising meet and greets, birthday events in BTS members’ honour and doing a lot more. The Desi BTS ARMY has been keeping a tab on every activity of the members and recently when Jimin aka Park Jimin was asked about Biryani, his comment left them tripping. Also Read – Hollywood Weekly News Rewind: Will Smith apologises to Chris Rock again; BTS Jimin’s dating rumours with Korean actress and more

BTS Jimin is going to be a big trending Hollywood News now. It so happened Jimin came online on Weverse and shared a post saying that he was thinking about what to eat. He asked ARMYs whether they all had food. And soon ARMYs flooded him with suggestions on what to eat. They suggested Jimin a lot of things including Pork Belly, Fried Rice, Ttoekbokki and more. And someone suggested to him about having a Biryani. Jimin replied to the ARMY saying, “It’s Indian Food.” And the fact that he knows about it has left ARMYs wheezing. Check out Jimin’s comment here: Also Read – WHAT! Meet BTS Jimin’s Philippines doppelganger that leaves netizens confused with his uncanny resemblance 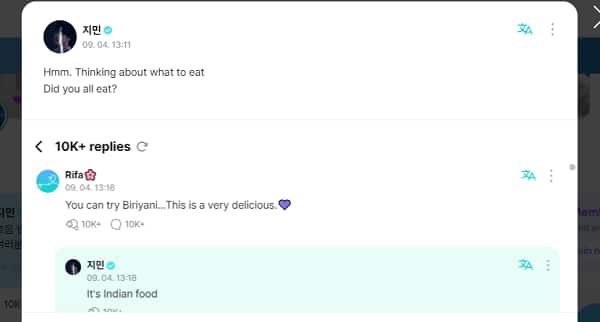 Also Read – BTS: From Taehyung aka V’s Yeontan to Jungkook’s Gureum – a look at the pampered pets of the boy band

Today, the Desi ARMYs would be ordering Biryani, we bet. They are tripping over the fact that Jimin commented on the post about Biryani and also knew about its popularity in India. The Desi BTS ARMY have taken Twitter by storm. Not just Indians but also Pakistani BTS ARMY are going bonkers. Check out the tweets here:

Me when Jimin said biryani is Indian food ?

Why is jimin knowing about biryani making me so happy? ?

I went to bring the crispy mix for my chicken and came back seeing jimin commenting on chicken biryani https://t.co/2Q5B43gio6

Jimin send me your address I’ll parcel it for you otherwise uk if you want i can come (ik it’ll take miles for me to reach there BUT FOR YOU I WILL DO IT?)nd will Cook for you (dw ik how to make biryani?just I’ll bring with me BIRYANI KA MASALA packet then sab kuch set ha bby)+ pic.twitter.com/Xw5mw7kDe6

I’ll make THE BEST BIRYANI for you Jimin… Just say the word and it’ll be at your door step! I’ll even clean up after for you!

jimin do you wanna go on a biryani date with me ????

From today I will start eating biryani every day. Jimin knows it

and when jimin tries biryani pic.twitter.com/P4aEFgffQP

AND THE CRAVING HIT HARD, SO NOW CHICKEN BIRYANI IS ON THE WAY???‍?
THANK YOU JIMIN JIMIN JIMIN? https://t.co/cxF5xvd3SQ

Meanwhile, Jimin recently grabbed headlines for his portrait by a South Korean painter. The portrait is currently a part of an exhibition at Paris’ Focus Art Fair. He also made news when his picture with producer Scottish DJ and producer Hudson Mohawke shared a story with Jimin. Hudson has worked with Drake and Kanye West in the past and the ARMYs are wondering what Jimin is presenting next with them.