Zendaya and Tom Holland havefast metamorphosed into one of Hollywood’s most loved celebrity couples after going public with their relationship. The A-list power couple keeps dishing out hip and nonchalant couple goals, typical to modern-day pairs. Of course, when you’re such a famous pair, who’s starred opposite each other in a blockbuster franchise like Marvel‘s Spider-Man, there’s bound to be a lot of rumours and gossip, too, that float around to go with the adulation. One such recent rumour was of Zendaya getting pregnant with Tom Holland‘s baby, which the actress has now issued a clarification over. Also Read – Ananya Panday asked to get b**b job, Esha Gupta advised fairness injections; 5 times B-town divas faced casual sexism, racism

A few hours after the rumours of Zendaya and Tom Holland having a baby went viral, the Spider-Man actress herself decided to come clean and set the record straight, taking to social media to silence all the gossip mongers, who were spreading it sans any corroboration whatsoever. Taking to her official Instagram handle, Zendaya posted a story and wrote: “See now, this is why I stay off Twitter… Just making stuff up for no reason…weekly.”. Check out her post below: Also Read – BTS leader RM’s beautiful abode is the perfect home everyone dreams of 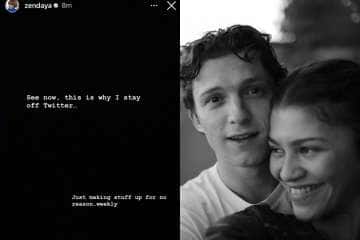 How did Zendaya’s pregnancy rumours emerge?

Talk of Zendaya getting pregnant with Tom Holland’s baby gained traction after a Tik-Tok video, containing a fan-made edit, of an ultrasound picture went viral. The video with the ultrasound pic was uploaded in a way that it seemed Zendaya herself had posted it from her Instagram account. Despite the vide cutting later to Kris Jenner dancing to the song, Lady Marmalade, the prank did its job to convince enough people, and the news spread like wild fire across varied social media platforms, but none more than Twitter. After Zendaya’s clarification, her fans again took to Twitter and other social media platforms to express disappointment over the fake news.