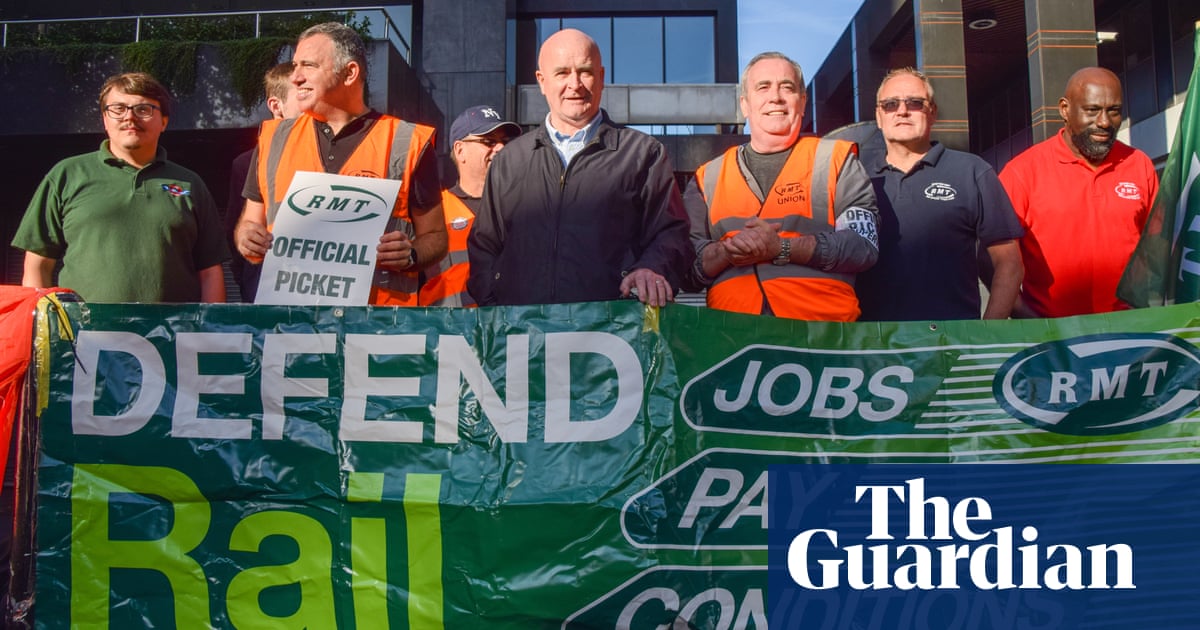 Rail services around Britain will be brought to a near standstill for the first two weekends in October after the RMT union announced a further national strike.

About 40,000 RMT members employed by Network Rail and 15 train operating companies will strike for another 24 hours on Saturday 8 October.

The fresh strike date follows the announcement of action the preceding Saturday, timed to coincide with the start of Conservative party conference, when train drivers in the Aslef union will also go on strike in the long-running dispute over pay and working conditions.

Aslef’s drivers will also strike on Wednesday 5 October, the last day of the conference in Birmingham.

The dispute appears to show no sign of resolution, despite tentative steps to establish dialogue between the government and unions, with the new transport secretary, Anne-Marie Trevelyan, already holding meetings with the leaders of Aslef and the RMT.

Mick Lynch, the general secretary of the RMT, said: “We welcome this more positive approach from the government to engage with us as a first step to finding a suitable settlement. However, as no new offer has been tabled, our members have no choice but to continue this strike action.

“We will continue to negotiate in good faith, but the employers and government need to understand our industrial campaign will continue for as long as it takes.”

Meanwhile, in better news for the railways, the intercity operator Avanti West Coast said it was ready to restore more services to its tattered schedules.

It will be adding about 10 trains a day to its busiest route between London and Manchester, roughly 40,000 extra seats a week, from next Monday, and some additional services on the London to Birmingham route.

After the wider timetable change in December, Avanti should be running its normal three trains an hour on the London to Manchester route, with Birmingham trains scheduled at least half-hourly, and restoring direct services to north Wales, the company said.

Avanti slashed its timetables in August because of a lack of drivers willing to work on rest days. It now says it has recruited and trained 100 more drivers and appears to be assured that more will agree to do overtime.

Barry Milsom, the executive director of operations and safety for Avanti West Coast, said: “We know we’re not delivering the service our customers rightly expect and we apologise for the enormous frustration and inconvenience this is causing.

“The decision to reduce our timetable in August was not taken lightly but our customers and communities deserve a dependable train service, so we’ve been working hard to rebuild our timetable in a resilient and sustainable way.

“Resolving this situation required a robust plan that allows us to gradually increase services without being reliant on train crew overtime. We are now in a position to start delivering this incremental increase in services, followed by a further increase in December.”