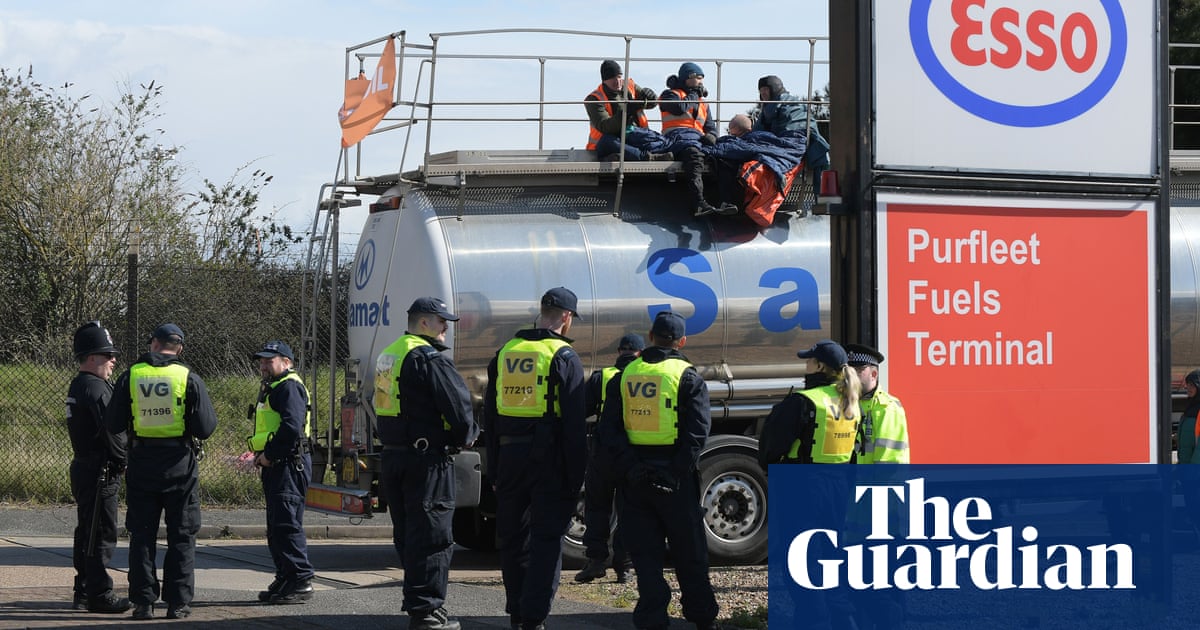 Environmental protesters have continued to block UK oil terminals as part of a campaign to disrupt the fossil fuel industry despite dozens of arrests across the country.

Supporters of Just Stop Oil began the action in the early hours of Friday morning at refineries near London, Birmingham and Southampton by climbing on to tankers and gluing themselves to roads.

Despite at least 34 arrests, the activists continued to disrupt oil terminals on Saturday morning and said they had gained access to further sites.

The group announced on social media that they had blocked Navigator terminals in Essex, posting photos of protesters in hi-vis jackets on top of a tanker and others blocking a road with a banner reading “Just Stop Oil”.

They said protesters had blocked access to the Titan Truck Park and revealed a secret underground network of tunnels leading to the site. The development means the main and emergency access roads to the critical oil terminals are closed.

“We need the government to stop funding new oil projects and we need it now! Our only means of highlighting this issue is mass civil resistance,” they said in a post on Instagram.

The group is demanding the government ends the expansion of new oil and gas projects. Just Stop Oil said this week’s campaign has seen them transition from using tactics of civil disobedience to exercising civil resistance.

Explaining what this shift would look like, one supporter told the Guardian last month that it would mean “stopping pointing out what the government should or shouldn’t be doing [and instead] actively stopping government doing what they shouldn’t be”.

The campaign, which has involved protesters being glued to roads, suspended on bamboo tripods, and locked on to oil drums and each other, is taking place in defiance of a temporary high court injunction banning protests outside oil terminals.

Outside Kingsbury and on roads leading to the site, posters said: “Temporary high court injunction in force. Blocking, slowing down, obstructing or interfering with traffic on to this road as part of protest activity by Just Stop Oil, Extinction Rebellion, Insulate Britain movements and other connected movements is strictly prohibited. Failure to comply with the injunction may lead to imprisonment.”

As a result of the blockades, the oil pipeline distribution network ExxonMobil UK closed down three of its terminals. Police from at least five forces were deployed to deal with the protests, making arrests for offences including aggravated trespass, criminal damage and obstructing the highway.