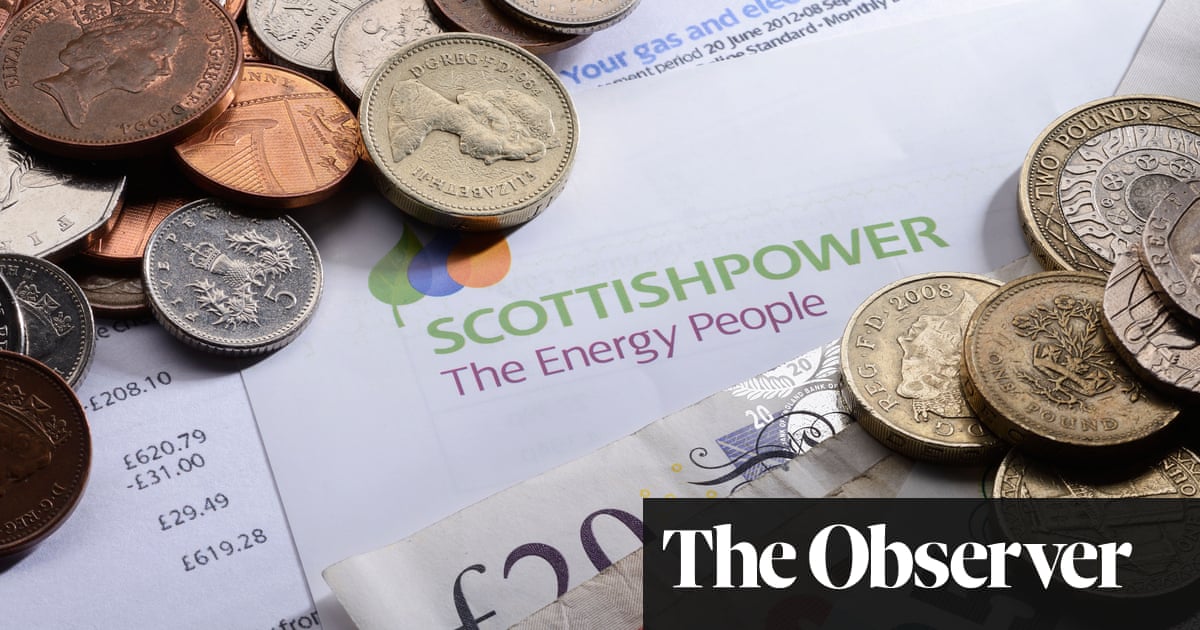 The debt collectors arrived when Laura Kennedy* was out. They left a letter to say they would be back to claim payments owed to Scottish Power.

Kennedy has never been a customer of Scottish Power and the bills were not in her name, but that hadn’t stopped the demands and threats pouring through her letterbox for 18 months. She is so terrified that bailiffs will enter her home and seize her goods that she is now moving out.

Utilities customers are already struggling with soaring bills after the regulator, Ofgem, raised the energy price cap by 54% in April. And now many are paying an additional price for technical and bureaucratic errors by suppliers. Faulty smart meters, incorrect billing and unpaid credit are leaving some households thousands of pounds out of pocket.

One reader who contacted the Observer was faced by a £1,300 bill after his smart meter stopped relaying readings last October. His supplier back-billed him for his energy consumption over the winter using new, inflated tariffs introduced in April.

Ofgem recently ordered five suppliers to take urgent action after a review found that misapplied direct debits were overcharging some customers and undercharging others, leaving them with large deficits. It also said it was concerned that half a million households had seen their direct debits double, and was requiring companies review their calculations.

Complaints website Resolver reports a rise in billing errors and in failure of customer services to address problems. Spokesperson Martyn James said: “I’m deeply concerned about the levels of customer service in the energy industry since the cost of living crisis began, with people reporting ridiculous bills that are clearly errors, firms too quick to call in the debt collectors, and massive inconsistency in helping people with financial difficulties. A unified approach to complaints, and more staff to answer the phones, is urgently needed.”

Problems have been compounded by the demise of many smaller suppliers, according to the energy ombudsman, which said that the number of disputes had risen this year as households felt the squeeze.

Thirty-one companies have ceased trading since the start of 2021 after soaring wholesale gas prices made them unsustainable. In some cases, the suppliers who took on their customers have inherited incomplete or erroneous account records, which have led to baffling bills.

Scottish Power told the Observer that Kennedy’s ordeal began because of erroneous meter data it inherited from Tonik Energy, which went bust in 2020. “We were only ever provided with one property address, excluding any flat number, as well as a corresponding meter number,” it said. “This resulted in the same meter unknowingly being registered twice on the national database – one supplied by Tonik/Scottish Power and one supplied by E.ON.” Scottish Power stopped the action and corrected the meter details.

Helen Maguire had been told her account was more than £3,000 in credit by her supplier, Utility Point. The company ceased trading before it could be refunded, and her account was transferred to EDF. But instead of the cheque she was expecting, she was sent a bill for £900 and told her annual spend on energy was forecast to be £9,000.

Only when the Observer intervened was it discovered that Utility Point had been given an inflated final meter reading by an earlier supplier and then based its bills on estimated readings of successively diminishing amounts. Maguire was, in fact, owed £635, not the £3,000 quoted on her final Utility Point bill. EDF, which inherited Utility Point customers, claims it does not have access to Utility Point records and struggled to confirm Maguire’s account status. It has since settled the account.

Customers whose complaints remain unresolved after eight weeks or who receive a letter of deadlock from their supplier can take their case to the energy ombudsman. However, a decision in the customer’s favour does not necessarily bring closure.

Samantha Rennie has spent two years trying to reclaim the £2,000 credit accrued on her electricity account and to reduce her direct debit payments. Earlier this year the ombudsman discovered that SSE had under-billed her for her daytime consumption and failed to bill her at all at night after taking over her account in 2020, despite meter readings submitted by Rennie. It ordered SSE to issue correct bills and recalculate any credit owed.

Five months on, Rennie said she was still waiting. “I have telephoned and emailed the ombudsman every two weeks or so, and am told repeatedly that SSE will be/has been asked to action their decision, and still nothing happens,” she said. “I’ve read that holding on to consumers’ credit is a common ploy by energy companies. So what can we do about it once all avenues of complaint are exhausted?”

SSE only complied with the decision after the Observer got involved. It said that a “mismatch of readings” had delayed the processing of her credit, and that a customer service “shortfall” meant it wasn’t followed up. A “technical issue” then prevented it from meeting the ombudsman requirement to correct the billing. A spokesperson said: “We are very sorry for the time taken to resolve this case.”

Rennie said that without media involvement, she believed she would still be waiting. “It’s astonishing that companies can treat people in such a feckless manner,” she said. “When I pleaded with them to pay me in December so I could afford to heat my house when my sick mother visited for Christmas, they ignored me. In a cruel irony, they only paid me what they owed on 1 July – the day my mother died.”

*Name has been changed

How to complain about a bill

Contact your supplier by phone or webchat and explain the problem and how you want it resolved. Follow this up with an email or letter including your account number so you have a record. Citizens Advice provides a template letter for guidance. Vulnerable customers can seek assistance from its Extra Help unit, and there’s a helpline for those struggling to pay their bills.

If the company fails to resolve the problem within eight weeks or if you reach deadlock, you can take your case to the energy ombudsman. You have to do this within 12 months of receiving a letter of deadlock from the supplier. Ombudsman decisions are binding on companies, and customers have two months in which to accept their remedy. If you are still dissatisfied, you can take your case to the small claims court.

Suppliers can’t retrospectively charge for more than 12 months of energy if they had not previously sent a bill or a statement. This includes recovering shortfalls if direct debits were set too low. Avoid cancelling direct debit payments while an account is in dispute as this could affect your credit rating.