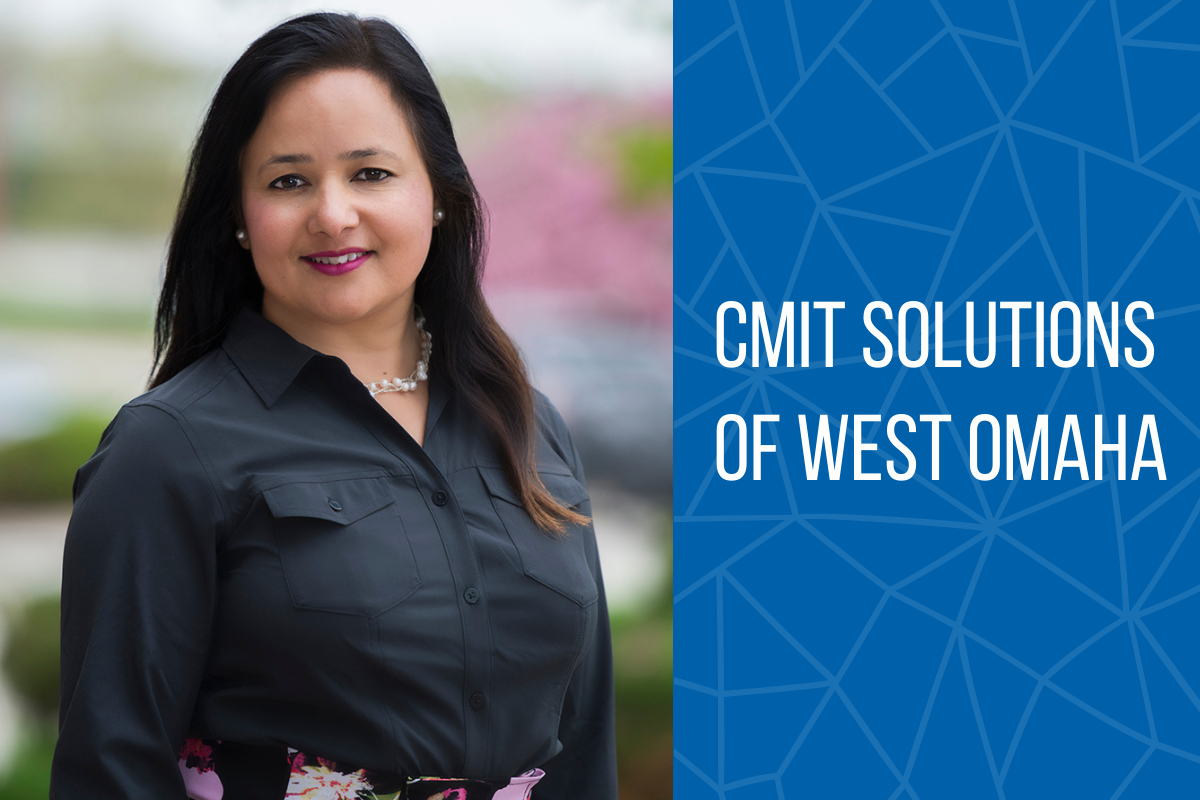 Omaha, Nebraska – Facing incredible challenges is nothing new for Puja Kandel, whose career path began in Nepal and has stretched nearly 7,000 miles to Nebraska, first to earn a college degree and now to serve as principal owner of CMIT Solutions of West Omaha, a provider of IT support services.

Kandel was born in Kathmandu and grew up in eastern Nepal, where her father owned an accounting firm. After working as an elementary school teacher and taking university classes in Nepal, Kandel in 1998 realized a longtime dream of studying abroad and came to the United States to attend the University of Nebraska at Kearney (UNK).

In 2002, she graduated from UNK with a degree in computer information systems and business administration. During her senior year, she met Khem Kandel at a graduation party at UNK. Also from Nepal, he was working in Omaha as a software developer. They fell in love and returned to Nepal in 2003 to be married in a traditional Hindu ceremony.

She began her career as a software developer in an Omaha IT company, and then took a job as a systems analyst for a local health system, and also provided IT consulting. But the hours were long and kept her away from the couple’s daughters, Riya and Myra.

“No matter how much I tried to balance my career with two young children, my schedule was very frantic at times, especially when Khem had to travel for conferences and work,” she recalls. “Sometimes, my kids were the first ones in daycare and the last ones to be picked up. That broke my heart.”

In 2014, the couple began to investigate franchise opportunities. “My dad used to own his own business, and in the back of my mind, that was what I wanted to do,” she recalls. “I had 12 years of IT experience, so I felt that was the time.”

Kandel says she was introduced to CMIT (Completely Managed Information Technology) Solutions by a franchise broker. CMIT Solutions, headquartered in Austin, Texas, has more than 200 offices in the U.S. and Canada that deliver managed IT maintenance and monitoring, backup and business recovery, and cybersecurity protection. “Once I got into the discovery phrase of CMIT Solutions, I was amazed to see so many successful women in the system and wanted to be part of it,” Kandel says.

She says she learned early on the value of networking and “surrounding yourself with smart people.” She joined several business-related civic groups, and at one meeting was introduced to the Nebraska Business Development Center (NBDC) and its Procurement Technical Assistance Center (PTAC) services by a former PTAC consultant.

Most recently, Kandel has worked with PTAC Consultant Patrick Guinotte on the System for Award Management (SAM) registration renewal for her CMIT Solutions franchise.

“Puja came to our group looking for SAM renewal assistance, and during that process I inquired about her interest in government contracting,” Guinotte says. “We had a discussion about capability and about starting with local or state contracts. She came back with a request for proposal (RFP) for IT services with the Omaha Housing Authority. We reviewed the RFP to see if it was a good fit for her organization.”

Kandel’s bid for that project was accepted, and she has since worked with the NBDC and Guinotte on an application for a Woman Owned Small Business Certification, which is pending.

Kandel says that when she was growing up in Nepal, “being focused and a hard worker became my habit and gave me an identity.” Those values continue to have a positive impact on her life today.

“When you start a business, nothing is going to come to you,” she says. “You have to work for it.”

Learn more about CMIT Solutions of West Omaha on their website.