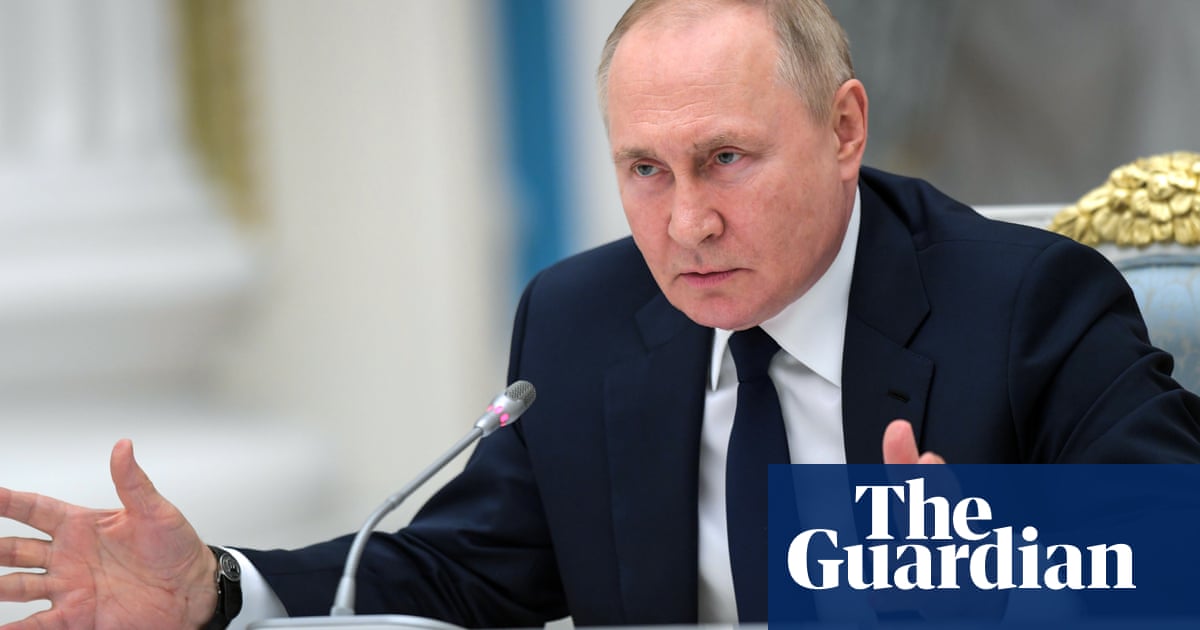 One question is dominating the energy industry: will Vladimir Putin turn the tap back on? This week the Kremlin-controlled energy firm Gazprom shut off gas supplies through the Nord Stream 1 pipeline for maintenance until 21 July, having already cut its output to less than 40% of capacity. Now there are growing concerns that the Russian president may simply refuse to reactivate it.

This week energy executives at the Aurora consultancy’s conference in Oxford were asked to vote on whether the supplies would return. A forest of confident arms shot up for “yes”, a similar amount for “no”. Only Putin knows the answer.

Fears for gas supplies have led European nations to rapidly fill up their storage capacity before the winter. Andriy Yermak, chief of staff to Ukraine’s President Volodymyr Zelenskiy, has accused Russia of conducting “gas blackmail”. By contrast, nations with closer links to Russia, including Belarus and Turkey, have seen little disruption.

Although Moscow had a record of restricting gas flows to Europe as part of past disputes with Ukraine – including in 2005-06, 2009 and 2017 – many in the industry had assumed that because the Kremlin kept supplies flowing throughout the cold war, it would not resort to cutting off its largest market. However, Ben van Beurden, CEO of Shell, said this week that Putin has now shown “he is able and willing to weaponise supplies”.

The strategy has the apparent aims of weakening Kyiv’s allies and, potentially, turning nations on one another. This week Hungary’s pro-Putin prime minister, Viktor Orbán, said it would halt gas exports to its neighbours. The move undermines a regulation that made solidarity among European countries mandatory to prevent the supply cuts seen after the 2017 Russia-Ukraine gas dispute.

Less gas sold in Europe means less money for the Kremlin’s war chest, and the EU has committed to cutting Russian imports by two-thirds by year end on that basis. However, despite EU leaders agreeing a partial embargo on Russian oil, any outright ban on its gas appears unlikely given how much many of its members rely on it. So which countries are most vulnerable to Putin’s pressure as he turns the screw?

The European economic powerhouse has been left most exposed by the sudden lack of Russian gas after the closure of Nord Stream 1, which runs from Vyborg, north-west of St Petersburg, under the sea to Germany’s Baltic coast.

The German economy minister, Robert Habeck, says the Kremlin is using gas “as a weapon” and admits his country had made a “grave political mistake” in becoming too dependent on Russian supplies. Germany imported 59.2bn cubic meters of gas through Nord Stream 1 in 2021 and had hoped to double that via a new sister pipeline, Nord Stream 2, but suspended those plans days before the invasion of Ukraine.

Germany has hastily tried to wean itself off Russian gas to distance itself from Putin since the war. Meanwhile, Gazprom cut supplies through Nord Stream 1 to 40% of its capacity in mid-June. As a result, Germany’s dependence on Russian gas has fallen from 55% of total consumption to 35% since the war. But the government has still been forced to declare a gas crisis, asking industrial users to slash usage and encouraging councils to turn off traffic lights at night, cut the use of air conditioning and stop lighting up historic buildings.

Investors are at their most pessimistic over the German economy since the throes of the eurozone debt crisis in 2011, amid fears it could slump into recession.

Italians are currently battling a heatwave but staying warm this winter remains high on the agenda in a country with the oldest population in Europe. Russian gas imports accounted for 18% of consumption before the war in Ukraine and are largely piped via the Trans Austria gas pipeline.

Power group Eni said this week that Gazprom would cut supplies to Italy by a third, on top of cuts of 60% since war broke out. Confindustria, the association representing Italian industries, has said a complete halt could see its GDP drop by 2%. Rising bond yields indicate markets are increasingly concerned over the country’s abilities to repay its huge debts.

Italy’s gas storage sites are now about 60% full and plans have been floated to ask consumers to turn down their heating this winter and spend less time showering.

SPP, the main Slovak gas importer, receives most of its gas from Russia and even Zelenskiy acknowledges the Slovaks cannot immediately cut off that source. SSP has managed to ramp up liquefied natural gas (LNG) imports from Norway and other nations until the end of the year. A new Polish-Slovak interconnector pipeline, due to open later this year, is also being tested.

Austria gets 80% of its gas from Russia and its storage depots meet just 39% of its annual needs. The government has pledged to spend €6.6bn on building up reserves although Haidach, one of Europe’s biggest underground gas reservoirs, is unlikely to be filled due to tensions between its joint owners – a German and an Austrian firm and Gazprom.

The Dutch energy ministry has said the country has managed to meet its goal of ending its need for Russian gas for domestic use. However, as a huge storage and transport hub, it could take a knock from reduced flows. In May, Gazprom halted gas supplies to Dutch company GasTerra after it refused to meet Kremlin demands that all gas be paid for in roubles.

France is less dependent than some of its neighbours on Russia, which supplies about 17% of its gas. But replacing energy output is complicated by the fact many French nuclear plants, which could have picked up the slack, are out of action because of maintenance and repairs. Russia briefly cut off supplies to France in June and Paris’s finance minister, Bruno Le Maire, this week described a Russian gas cutoff as the “most likely scenario”.

He said the country would initially ask households and businesses to cut energy consumption and then later look into constructing new infrastructure such as a floating LNG plant. French tyre giant Michelin said it had converted its boilers to ensure they are capable of running on oil as well as gas.

The Spanish prime minister, Pedro Sánchez, is facing geopolitical tensions over the country’s gas supplies on all fronts. His decision to support Morocco in a dispute over Western Sahara prompted a reduction in gas flows from Algeria, which has now been overtaken by Russia as Spain’s second largest supplier, behind the US. Russian supplies are entirely LNG while Algeria’s gas is largely piped to Spain.

Sanchez has talked up Spain’s existing facilities – the country accounts for 37% of the EU’s capacity for re-gasification, where LNG is turned back into natural gas – so could ramp up exports into the rest of Europe. Spain and neighbouring Portugal have also introduced a temporary cap on the wholesale price of gas.

Russia cut off Poland and Bulgaria in late April after they refused to comply with its demands to pay in rubles. Poland had received around half of its gas from Russia, with 9.9bn cubic meters of the 20bn it uses a year coming via the Yamal pipeline. However, it relies on coal for most of its power and has already filled up its gas storage sites.

A 1996 contract with Gazprom had been due to end this year and Poland had no intention of renewing it. Tom Marzec-Manser, head of gas analytics at consultancy ICIS, said: “Poland is not in a bad position because it has not trusted Russia for many years. It began this conversation about security of energy supply much earlier than other countries.”