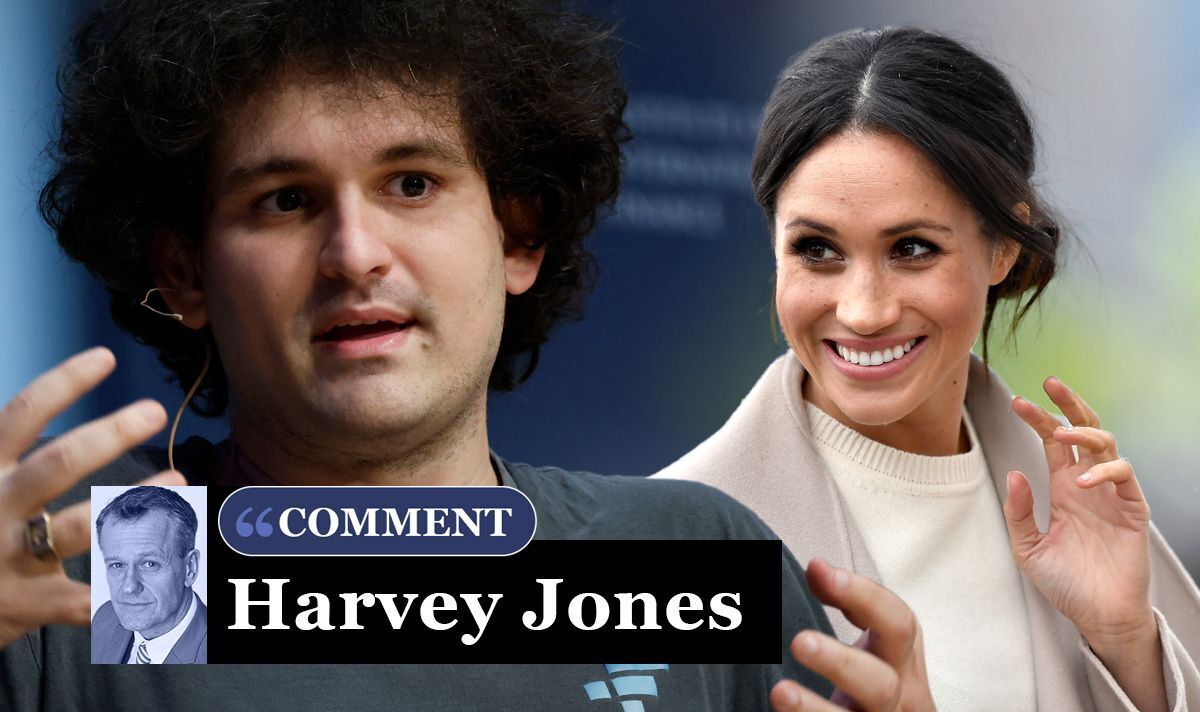 I remember the 1980s when capitalists openly proclaimed that “Greed was good”. That’s arguable, but at least they were open and honest about their desire to make mountains of cold, hard cash.

Today’s strivers and climbers pretend they are saving the world. Yet their aim is still exactly the same, which is to build their profile and line their pockets at our expense.

Meghan Markle is the most high profile proponent of this woke capitalist strategy, pretending to “build a better world one act of compassion at a time”, while monetising every move.

More like building a richer Meghan, one million dollars at a time.

Yet she is far from her alone. Today’s capitalists are busily faking virtues they don’t actually have and now one of the most crooked has admitted it.

You may have heard of Sam Bankman-Fried, now under investigation following the collapse of crypto-currency exchange FTX, whose valuation collapsed from £27billion to zero in days.

Investors have lost billions, including 60,000 Brits, but he has come clean about one thing.

Bankman-Fried build his reputation on a philosophy known as “effective altruism”. This where entrepreneurs make huge sums not for themselves, you understand, but to give to good causes.

He used his supposed philanthropy to deflect scrutiny over what he was really up to.

The self-appointed great and the good fell at his feet. Former US President Bill Clinton and disgraced Prime Minister Tony Blair were thrilled to share a platform with the shaggy-haired and scruffy Bankman-Fried.

Now he has admitted that woke is a just virtue-signalling game.

When a journalist messaged to say he had been “really good at talking about ethics” while actually playing a game, Bankman-Fried was shockingly honest.

He responded that he “had to be” because he’d been engaged in “this dumb game we woke Westerners play where we say all the right shibboleths and everyone likes us”.

Right now, the world is full of woke Westerners playing similarly dumb games and saving the world has nothing to do with it.

It’s just a new way of emptying our pockets and filling theirs.

The first ethical fund, Stewardship by Friends Provident, was launched way back in 1984 for people who didn’t want their savings invested in weapons, tobacco, pornography and anything else deemed bad for society or the planet.

At the time, cynical City analysts dubbed it the “Brazil fund”, saying you would have to be nuts to invest in it.

They’ve changed their tune. In these woke times ESG is now trillion-dollar industry.

The same asset managers who rubbished the well-meaning Stewardship fund are now blethering about climate change and workforce diversity, and guess what?

It’s just another dumb game. Too many are guilty of greenwashing, faking their environmental concerns.

Goldman Sachs, famously lampooned as a “great vampire squid”, said all the right things on ESG.

On Tuesday, the US Securities and Exchange Commission fined it $4million, saying it had misled customers on investments advertised as having an environmentally friendly focus.

Goldman Sachs paid the fine from some small change it found in a drawer, while refusing to admit or deny its guilt.

It also kept up the woke blether, proclaiming that it is “committed to its pursuit of best practices across its portfolios for sustainable, long-term value creation”.

The planet is full of endangered creatures but there’s a reason the great vampire squid is not on the list. It adapts to changing conditions.

So next time you find yourself fuming over the latest display of wokery, whether from a greenwashing pension manager, millionaire footballer or semi-detached member of the Royal Family, remember what they’re really after.