Skip to content
HomeBusinessEuropean shares on course for seventh week of gains; US jobs data eyed 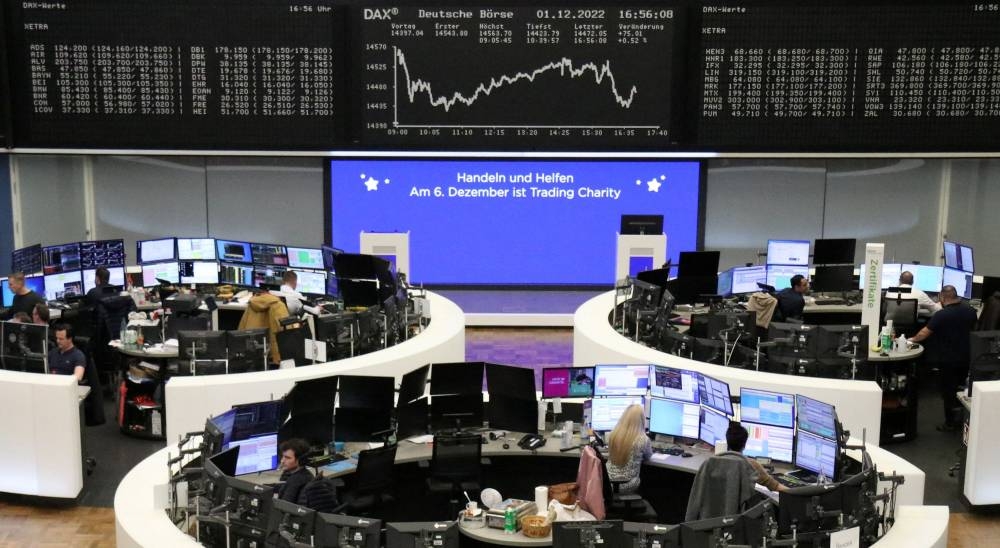 BERLIN, Dec 2 — European shares looked set to notch their seventh straight week of gains, despite a dip on Friday ahead of US jobs data, amid easing worries about global monetary policy tightening.

The pan-European STOXX 600 index fell 0.3 per cent after two days of strong gains. Energy and financial stocks were among the biggest drags on the broader index, pulling it further away from the June highs hit yesterday.

“There appears to be some profit taking after sessions characterised mostly by risk-on appetite. Optimism towards the economic reopening in China has helped drive gains,” said Victoria Scholar, head of investment at Interactive Investor.

Chinese officials this week softened their stance on strict Covid curbs that have hit global growth, amid protests in the country.

The STOXX 600 is on course to rise about 0.5 per cent on the week, set to gain for the seventh week in a row, its longest streak since April 2021.

“However, there is a little more caution today with the news of a potential cap on Russian oil and amid nervousness towards the closely watched US jobs report,” Scholar said.

Economists expect about 200,000 jobs were added in October in the United States, and any downside will be seen as proof that the Fed’s aggressive tightening has been working, strengthening the case for a more tempered stance from the central bank.

Data this week from Europe showing cooling inflation and falling German retail sales and exports have also made the case for the European Central Bank to opt for a smaller hike.

However, ECB President Christine Lagarde warned today that some European governments’ fiscal policies could lead to excess demand, which “might force monetary policy to tighten more than would otherwise be necessary.”

Among individual stocks, French drugmaker Sanofi fell 2.3 per cent on saying that if it bid for biotech company Horizon Therapeutics Plc, it would do so in cash.

Horizon, with a market capitalisation of about US$18 billion (RM79 billion), is also in talks with Amgen Inc and Johnson & Johnson unit Janssen Global Services over potential takeover offers.

Chipmakers made modest gains, with Infineon and BE Semiconductor up 0.5 per cent and 1.1 per cent, respectively.

US President Joe Biden said that new laws that give incentives for domestic production of computer chips and renewable energy parts were never intended to exclude European allies and could be tweaked. — Reuters