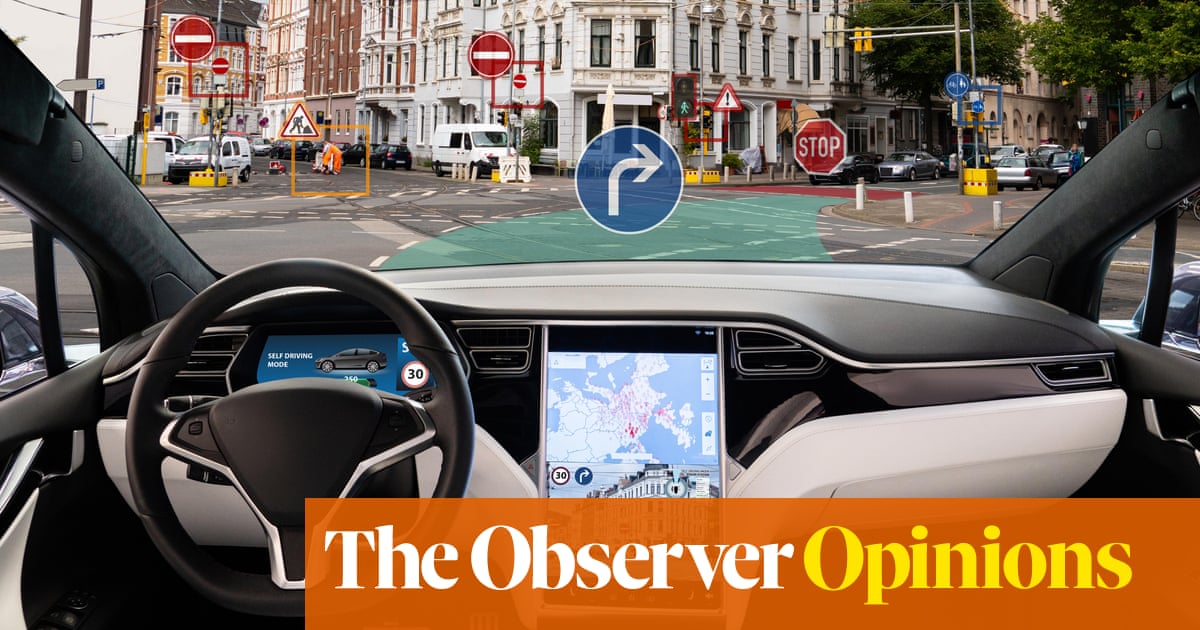 “Britain moves closer to a self-driving revolution,” said a perky message from the Department for Transport that popped into my inbox on Wednesday morning. The purpose of the message was to let us know that the government is changing the Highway Code to “ensure the first self-driving vehicles are introduced safely on UK roads” and to “clarify drivers’ responsibilities in self-driving vehicles, including when a driver must be ready to take back control”.

The changes will specify that while travelling in self-driving mode, motorists must be ready to resume control in a timely way if they are prompted to, such as when they approach motorway exits. They also signal a puzzling change to current regulations, allowing drivers “to view content that is not related to driving on built-in display screens while the self-driving vehicle is in control”. So you could watch Gardeners’ World on iPlayer, but not YouTube videos of F1 races? Reassuringly, though, it will still be illegal to use mobile phones in self-driving mode, “given the greater risk they pose in distracting drivers as shown in research”.

As usual, the announcement comes coated in three layers of prime political cant. This “exciting technology” is “developing at pace right here in Great Britain” (but apparently not in Northern Ireland; could it be that the DUP doesn’t approve of such advanced technology?). The government is “ensuring we have strong foundations in place for drivers when [the technology] takes to our roads”, which will be great once it has attended to the crumbling physical foundations of the roads in my neighbourhood. And of course it’s all happening “while boosting economic growth across the nation and securing Britain’s place as a global science superpower”.

Quite so. But what exactly is this self-driving capability that is being enabled by our local superpower? Turns out it’s ALKS, which is an acronym for “automated lane keeping systems”, a interesting technology that “enables a vehicle to drive itself in a single lane, up to 37mph, while maintaining the ability to return control easily and safely to the driver when required”.

Wow! Now for a reality check. The Society of Automotive Engineers (SAE) defines six levels of driving automation, ranging from 0 (fully manual) to 5 (fully autonomous). Level 1 is where the car has a single system for driver assistance. Adaptive cruise control, where the vehicle is kept at a safe distance behind the next car, is an example, because the human driver monitors the other aspects of driving, such as steering and braking.

Level 2 is “partial driving automation”. The car can control both steering and accelerating/decelerating. But it falls short of self-driving because a human sits in the driver’s seat and can take control of the car at any time. According to the SAE, the Tesla Autopilot and Cadillac Super Cruise systems both qualify as Level 2 on these criteria.

So what the government calls ALKS is actually a slightly degraded version of Level 2 automation, because it’s confined to speeds of 37mph or less. I say “degraded” because I drive a Tesla and can testify that its ludicrously named Autopilot doesn’t confine itself to such modest velocities. On motorways and well-marked dual carriageways it’s good at keeping the car in the centre of whatever lane it’s in and it will brake to keep a safe distance from the car in front, then accelerate up to whatever maximum speed one has set for it if the road ahead is clear. But you are obliged to tweak the steering wheel every minute to confirm that you are actually in charge of the car and paying attention. And the minute you take it off a dual carriageway on to a standard rural road it really struggles, sometimes even manifesting a worrying interest in the roadside verge.

So it’s useful in modest ways. A Tesla owner of my acquaintance, travelling on a motorway to collect his daughter from Heathrow, switched on Autopilot and settled down to slipstream behind a big truck at 60mph, thereby enabling him safely to think great thoughts while at the same time magically extending the range of his battery. It all went fine until his daughter rang, informing him that she had landed an hour ago and wondering where the hell he was!

But to talk about this Level 2 automation as “self-driving” is quite a stretch, even for the Johnson government. We may one day get to Level 5 – to vehicles that do not require human attention and won’t even have steering wheels or acceleration/braking pedals. They will be free from geofencing, able to go anywhere and do anything that an experienced human driver can do. But it won’t happen just yet, no matter how much Elon Musk warbles about “full self-driving” coming imminently to Teslas. Still, it’s good to see the UK government trying to get ahead of a curve for a change. And while they’re waiting for Level 5, wouldn’t it be a good idea to fix the potholes and disintegrating surfaces of British roads so that those driverless cars can have a smooth ride when they finally arrive?

What I’ve been reading

Speaking volumes
Books Become Games is a long and interesting essay by Justin EH Smith on how books have been marginalised in a world dominated by social media.

Curtains for neoliberalism?
A transcript of a fascinating conversation between the historians Gary Gerstle and Daniel Steinmetz-Jenkins on the strange life – and possible death – of neoliberalism.

The blog has its day
Jacob Wood has built a fascinating interactive online map of the blogosphere.